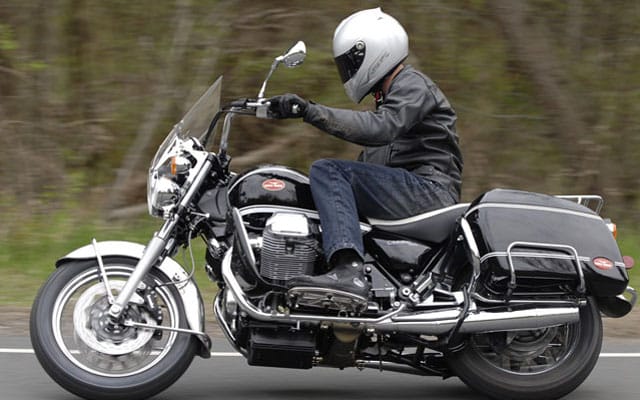 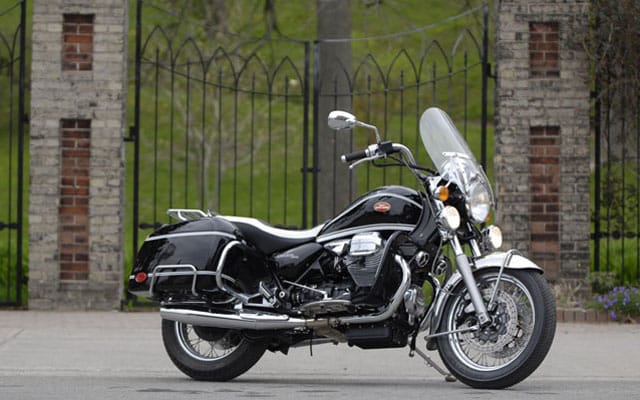 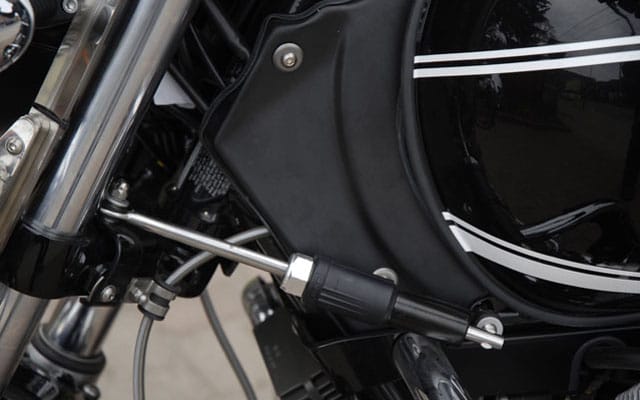 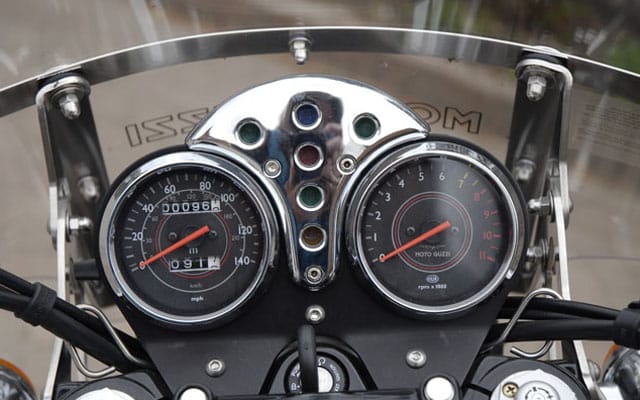 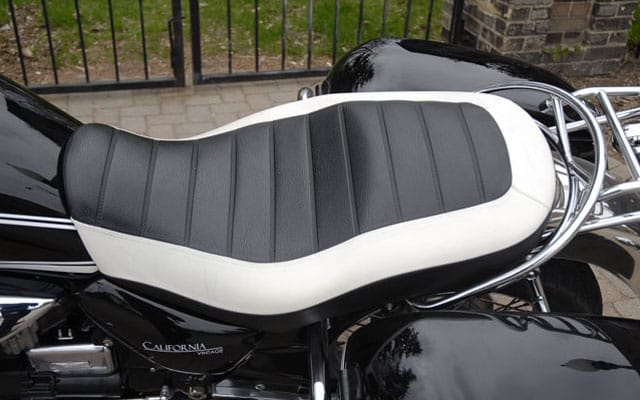 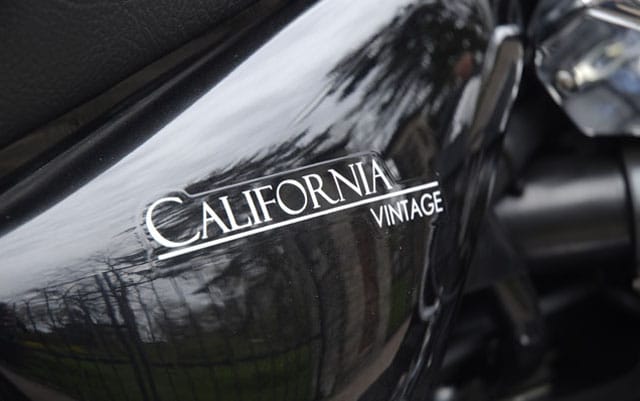 Moto Guzzi builds a retro cruiser with just enough Italian quirkiness to separate it from the pack. Now, if we can only reach the sidestand we’ll be fine. We like to think of ourselves as manly men, or at least manlyish men, but the Moto Guzzi California Vintage is making it difficult because the sidestand is a far reach and we’re becoming self-conscious. Scrunching way forward against the fuel tank, and with the left hip rotated forward, the toe of the left boot just reaches the arm and flicks it back against the frame. Now we’re ready to go, but not before a quick glance over the shoulder to see if anyone’s watching.

Originally introduced in 1971, the Moto Guzzi California is among the most American of motorcycles ever manufactured outside of the United States. Originally based on the frame of the V7 Special and with a 90-degree twin of 757 cc capacity, it found success first with the Los Angeles Police Department, then with police elsewhere in the US. Over the intervening 35 years, the California fell out favour with police forces and progressed through the years in very much the same way that Harley-Davidsons progress: styling only subtly changed and mechanical improvements cautiously adopted.

For the California Vintage, Moto Guzzi went back to its 1970s machines, and the styling results are very different than more contemporary retro-styled models. Even though Triumph’s Bonneville and Ducati’s Sport Classic range are based on previous models, there is no mistaking them for vintage machines. Tires are bigger, engines newer and the stance more modern—but not so with the California Vintage. When we first spotted it in the Moto Guzzi booth at last winter’s bike show, we just assumed it was an old bike restored, brought in to tempt people to check out the modern machines surrounding it. It was only its immaculate finish that raised suspicion as to its authenticity as a true vintage machine, because motorcycles only look new once, and yet this apparent 30-something looked like it had just rolled off a production line, which of course it had.

Mechanically, the California Vintage is updated with the engine from the Breva 1100. While modernity is addressed with Magneti-Marelli fuel injection, the engine is still an air-cooled design with its twin-sparkplug heads using two pushrod-operated valves per cylinder. Mechanical tappets require periodic adjustment, though some Guzzi models feature maintenance-free hydraulic tappets. While the Breva is a sophisticated modern motorcycle that transcends its old-fashioned engine, from the saddle the California Vintage is eerily like an old bike, with its tiller-like handlebar and bolt-upright seating position. Shifting the five-speed transmission using the heel/toe shifter is awkward on the  California. It is improperly adjusted and you must either wedge a toe beneath the forward shifter peg or lift your foot high off the generously sized footboard to get it over the rear shifter peg like you’re about to stomp on a mouse. The threaded shifter rod is adjustable so it should be an easy fix to cant the entire shifter down at the rear, but the rod is at the end of its adjustability and the shifter remains at an awkward angle. If it were our bike, we’d put a hacksaw to the rod and cut more threads with a die to fix the problem (we’d also saw the irritating heel section off the shifter). But since we have to return the bike intact, for the remainder of the test we shift with the grace of a farmer searching for the next cog on his International Harvester.

Shifting issues aside, the engine bolts the California Vintage down the road with surprising vigour. Dry weight is quoted at 263 kg (580 lb) but the bike feels heavier. It even looks heavy, with driving lamps, standard fitment hard saddlebags, chrome fenders and large diameter chromed crash bars fitted front and rear. Even the handlebar is shiny and massive. But unlike most heavy cruisers that cringe at corners, the Guzzi hurtles around bends with authority, with enough cornering clearance between the footboards and the road to allow surprisingly generous lean angles. Wheelbase is modest by cruiser standards at 1,560 mm (61.4 in) and the chassis does not unduly flex in aggressive riding.

Although the California shares its engine with the Breva, it does not have the Breva’s modern mono shock single-sided swingarm, making do with a traditional dual-shock arm that retains Guzzi’s trademark shaft drive. While it does not have the Breva’s road compliance, the ride is firm yet acceptably supple, with the shocks adjustable for preload. Each Marzocchi 45 mm fork leg is independently adjustable, the left for compression and the right for rebound damping. Aiding comfort is a seat the width of a surfboard handsomely trimmed in white. While we didn’t test with a passenger, accommodations look inviting for two. Dual front 320 mm Brembo disc brakes with four piston calipers are one of the few visual cues that this is not a 1970s motorcycle. Operating the 282 mm rear brake also   employs one of the front discs in the linked braking system.

While braking performance is strong, lever pull is substantial, though perhaps Guzzi decided that sport bike-style, two-finger braking would be out of place on a machine so rooted in the past. Large vertical windshields as fitted to the California Vintage and many other cruisers typically look more effective than they are. Wind management is a complicated riddle to solve, and simply fitting a large screen to punch a hole in the atmosphere often causes negative pressure at the rear of the screen and considerable buffeting. Here the Guzzi is better than most of its competitors, and while high-speed dashes cause the wind to swirl around your helmet like a typhoon, 120-km/h cruising is done in relatively still air—which makes the California a genuinely usable motorcycle. So fill the saddlebags with six pairs of socks and six clean t-shirts and hit the open road, but keep an eye on the fuel gauge. In mixed city, country and highway use, we recorded an appalling 10.7 L/100 km (26 mpg), which makes the California one of the thirstiest machines recently tested. The attractively trimmed fuel tank holds an acceptable 19 litres of fuel, but it only translates into 178 km of range. When we got the bike it was brand new, and perhaps fuel economy would improve slightly with more mileage.

At $18,995 (including two-year warranty and roadside assistance, to calm those with fears of things Italian), the Moto Guzzi California Vintage is an expensive motorcycle, but unlike many of its cruiser brethren, it is a machine that shows the sporting lineage of its manufacturer. The California is an unusual combination of characteristics: it is a retro-styled cruiser with heavyweight tourer capability, yet it is unafraid of twisty roads and high speeds. It might be an unusual repertoire of attributes, but the California manages them well.