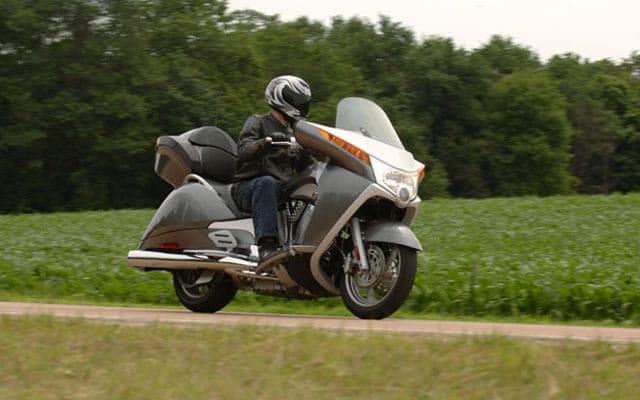 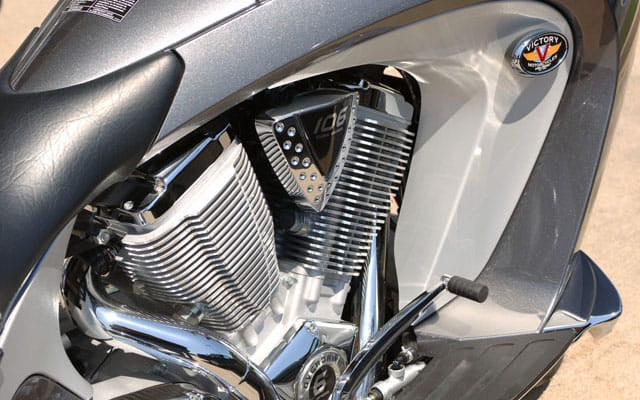 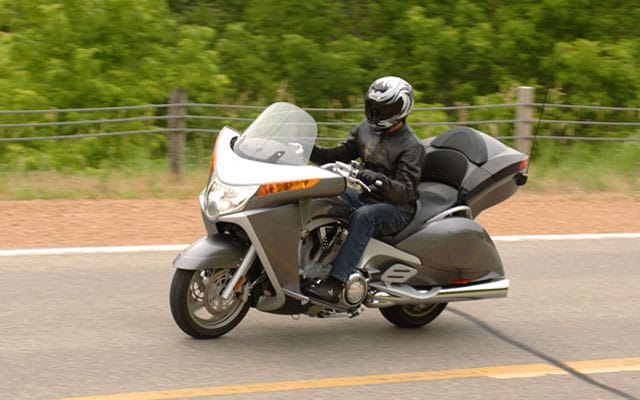 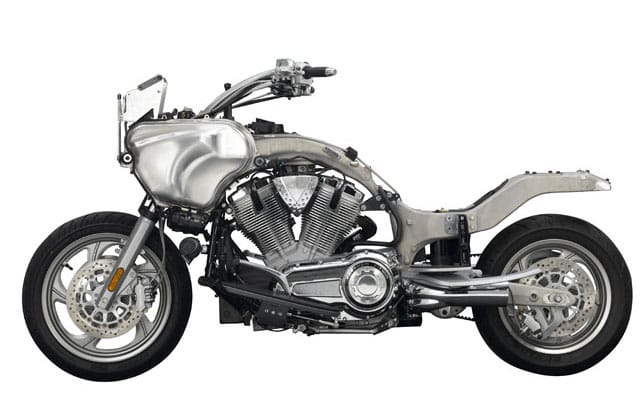 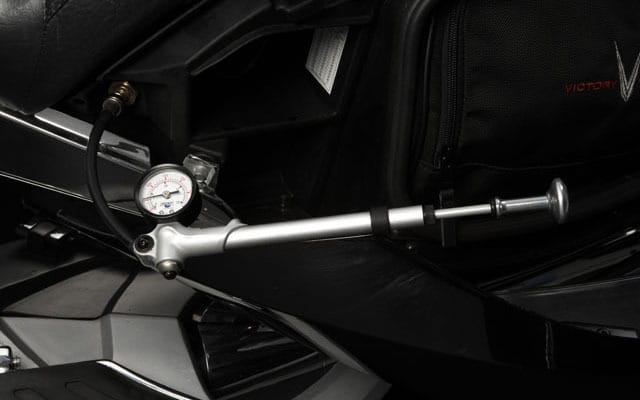 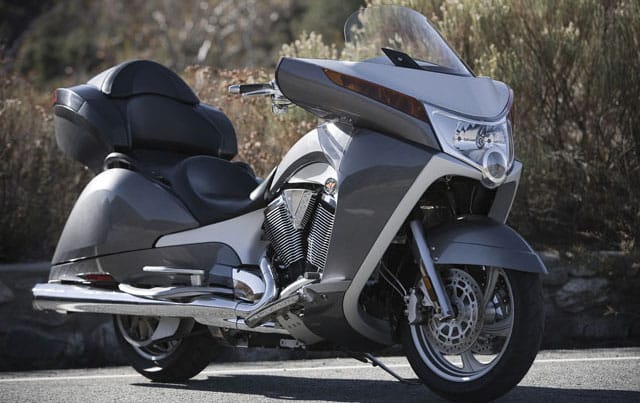 Victory engineers discover the French curve and produce a massive ship for the high seas of long-distance touring. But can this V-twin bridge the gap between American tradition and Asian sophistication? Rare are the times when I ride a motorcycle that I’m not paying attention to its mechanical function. It’s the downside of this job, an over awareness of meshing gears, handling quirks and spongy brakes. But today is different. Just outside of Spirit Lake, Iowa the skies have gone black with a pending storm and yet the fields (upon fields, upon fields) of early season corn are glowing iridescent green. No wonder the infirm in these parts are prone to seeing aliens gallivanting about in the moonlight. It’s been at least a half-hour since we’ve rounded a corner, any kind of corner, even a kink, so I’m able to focus on singing. Flipping between old-time country and bluegrass on the satellite radio, I try to bend a note like George Jones, but even with a helmet and earplugs and the wind noise I still sound dreadful, and curse my parents for begetting a tone-deaf son. And then it hits me. I’m riding a motorcycle and I’m comfortable, really comfortable, and that’s not something that happens very often.

The Victory Vision is the most talked about motorcycle I’ve ever ridden. But I don’t mean talked about by the public, I mean talked about by the manufacturer. In the last two years I’ve attended two Victory launches and much time was dedicated to discussing this model. What was odd was that no date was announced for its release. We weren’t shown photographs and questions were deflected in a polite mid-western way. But there was nothing demure about the hyperbole surrounding it. I cringed when a slick video showed the lead designer say that the as-yet-unnamed motorcycle would be a watershed in American motorcycle design. Over and over the word “iconic” was repeated. I nearly leapt to my feet and demanded that they just make the damn thing and stop talking about it. Well, they finally did.

Nothing so far in Victory’s nine-year history would have led us to believe that they would make this machine. Well-engineered traditional cruisers in the heavyweight V-twin mold have been the staple of its lineup. Its touring machines have been standard cruisers gussied up with saddlebags and windshield. Good enough for the short haul, but not the best choice for the trip to the Pacific and back. But that’s changed with this machine. Victory’s goal was a touring machine with American V-twin power but with the sophistication to stand up to the best long-distance machines in the business, the Honda Gold Wing and the BMW K1200LT, and that’s a tall order. Some may have expected Victory’s version of Harley-Davidson’s Electra Glide baggers, but, as Victory has learned, swaying the HD faithful is as likely to happen as dragging an alcoholic from the bar at happy hour.

Big touring machines mean a lot of weight, so Victory began by enlarging its existing 50-degree V-twin 100 cubic inch (1,639 cc) engine to 106 cubic inches (1,737 cc) by an 8 mm increase in stroke. Special attention was paid to the requirements of touring. Electrical capacity was boosted to 50 amps from 38, first gear was lowered slightly while sixth was raised, and internal oil passages in the air- and oil-cooled engine were modified for more efficient cooling. A hydraulic clutch was added, and since the solidly mounted engine was going to be used as a stressed member, it was reinforced. The result is an engine that claims 109 lb-ft of torque and 92 hp, with 100 lb-ft of torque available from 2,000 rpm.

Abandoning the steel-tube frame as used on its other models, the Vision frame is comprised of two massive aluminum castings, one arcing over the engine and containing the steering head and an airbox within the casting, and another running from the rear of the engine aft to support the riding platform and the saddlebags. The swingarm is suspended by an air adjustable mono shock. There are no frame downtubes running beneath the engine connecting the steering head to the swingarm area, so the sidestand and footboards are mounted directly to the engine.

Victory, in its presentation, talked extensively about riding position. As seen by Victory, there is the “ready” position, where the feet of the rider are directly below the hips, a design personified by the Gold Wing and the BMW K1200LT. Then there is the “relaxed” position, where the feet are shoved forward, like HD baggers. In its extensive focus groups, Victory learned that American enthusiasts wanted a sophisticated motorcycle but with the “relaxed” riding position. When I express my ambivalence about the American obsession with the “relaxed” riding position to an engineer (feet first is good for water slides and tobogganing, less so for the control of a motorcycle), he tells me not to worry, saying that the footboards are long enough to allow for different riding styles. My skeptical look causes him to chuckle. “Wait until you ride it tomorrow,” he says.

Throwing a leg over the Vision outside our Minneapolis hotel the next morning, what first surprises is the low seat, at 673 mm (26.5 in) it is the lowest in the class, according to Victory. Moving my feet onto the long footboards, I confirm that the engineer was telling the truth: they’re long enough so that when you slide your feet as far back as they’ll allow, it is very nearly a “ready” riding position, in the Victory lexicon.

Pulling into busy morning traffic, the Vision takes very little handlebar pressure to control. Until I am acclimated to the bike it is hard not to add too much handlebar input, even while consciously relaxing the arms. Combined with relatively little feedback from the road, the first impression is of a V-twin Gold Wing, another bike that wafts across the tarmac. Low speed handling, as it is with virtually every other touring bike of this size, is slightly ponderous, with a top heaviness that fades as speeds rise, unsurprising considering the Street model is 365 kg (804 lb) while the tail trunk equipped Tour model is a whopping 385 (849 lb).

Gold Wing comparisons continue as we clear Minneapolis for sweeping rural roads. Handling is superb; the chassis rigid and composed even at a near sport-touring pace. Time constraints do not allow us to alter air pressure in the rear shock, and given the procedure (manually pumping it up or letting air out as you would to an inner tube) many owners will likely not bother either. Stock settings in the fork seem a good compromise, which is a good thing, as it’s non-adjustable. While its good handling encourages rapid travel, the brakes are equally up to the task. Dual 300mm front rotors have three-piston calipers, while the rear is a single 200 rotor with two-piston caliper. It is a linked system, with the rear brake pedal also operating one-piston on each of the front two rotors. Lever effort is high but stopping is effective. Curiously, on the Vision’s dedicated website no mention is made of linked braking, and when I ask why ABS is not an option, Victory claimed that focus groups said they’d rather spend the extra $1,000 on chrome and not on brakes. Perhaps they’d think differently if surprised by a deer caught in the gleam of the chrome.

Engineers said that one of the challenges of a fully faired bike is that the rider easily hears excessive engine noise, as clatter is not masked by wind, so much time was invested in monitoring harmonic frequencies. The hard work shows, as the counterbalanced twin is exceptionally smooth and quiet, especially taking into account its use as a stressed member. Even the bolted-to-the-cases footboards do not vibrate excessively. The engine pulls easily from 1,500 rpm, gains strength at 2,000 rpm, and hits a sweet spot at 2,500 rpm where top gear gives effortless 70 mph cruising. All remains smooth until 90 mph, with vibration sneaking in only as 100 mph is passed, but even then it is entirely livable. Victory boasts that its sixth gear is a “true overdrive” and that shifting for passing is not necessary. They’re half right; sixth gear is indeed very tall, and until 60 mph is reached, there is little need for it. And while you can pass in top gear, unless you can see to the horizon it makes more sense to drop down to fifth where the engine responds with vigour. The gearbox requires a firm prod, and its action is positive, if somewhat clunky—not as light as multi-cylinder bikes but comparable to twins of similar displacement. Our riding is done in blustery conditions—at times cool and at others very hot—and even at 30-something Celsius the cockpit remains very cool with little engine heat transmitted to the rider.

Creature comforts are very good. The seat may rival the Gold Wing’s as the best in motorcycling—it’s that well designed. With four inches of foam it is firm enough to support but with good compliance. Allied with a reasonable foot position, a long day in the saddle was done with ease. I tried models with and without the electrically adjustable windscreen, and I’d strongly encourage prospective buyers to avoid the manual windshield. Once again the Vision emulates the Gold Wing, with a manual windscreen mechanism that is cumbersome to manipulate and requires that the trim below the shield to be yanked off before the height can be adjusted. If you’re in this deep (prices on the Street range from $23,369 to $24,869 and the Tour is $24,599 to $26,099), this is not a good place to economize. Saddlebag capacity is less than the outside view would suggest, but the top case holds two full-face helmets, and Victory claims that the sealing around the openings is automotive grade—which means they shouldn’t leak.

Fairing wind management is very good, and adjusting the windshield until my eyes just see over the edge is my preferred setting. Raising it to its top position reveals a slight reflection in the upper lip that is mildly distracting, but it is a useful setting for chilly weather or when you require an extra-quiet cockpit for singing along with the radio. The Vision’s cockpit is the cleanest yet for a big touring bike, and switches for cruise control, radio, CD and MP3 players are intuitive and easy to understand, and big analogue gauges for the speedometer and tachometer are reassuringly traditional for such a futuristically styled machine.

Which brings us, finally, to the styling. When the photographs first surfaced at the office we looked at them aghast. One suggested that 70s fairing guru Craig Vetter was working for Victory. Even Victory admits that the styling is not for everybody, welcome honesty after its bombastic statements before the Vision’s launch. Victory obviously studied the Gold Wing closely, and the Vision rides very much like a Honda with a locomotive-like V-twin down below. And regardless of your views on the styling—and I still have severe reservations—here’s the kicker: the bike works extremely well, and in a marketplace often driven by fashion and frivolous styling, I’ll take the Vision’s function, even if it comes in a very unusual form.