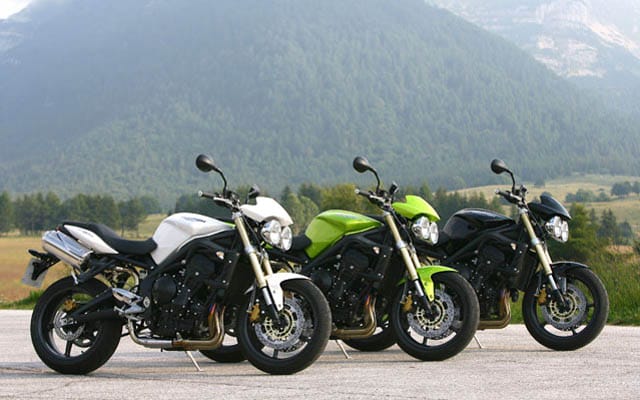 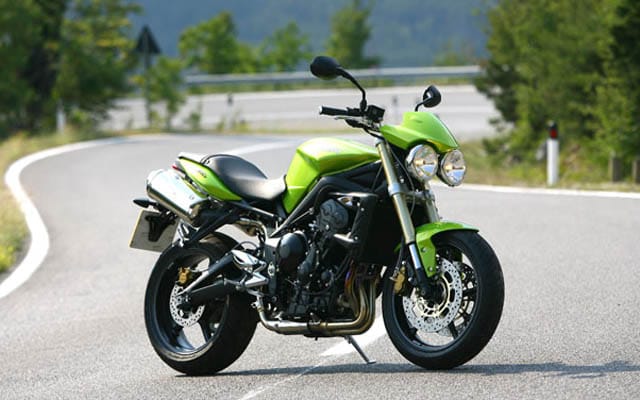 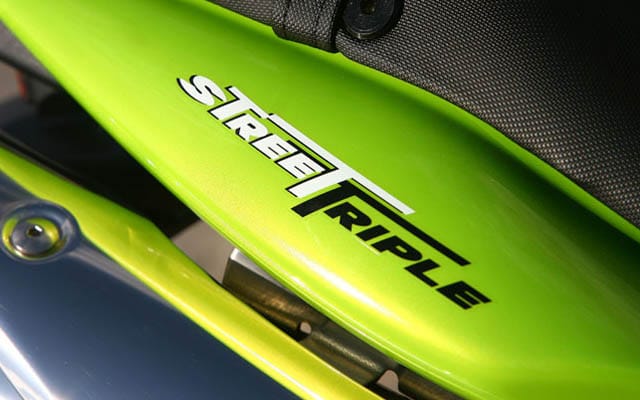 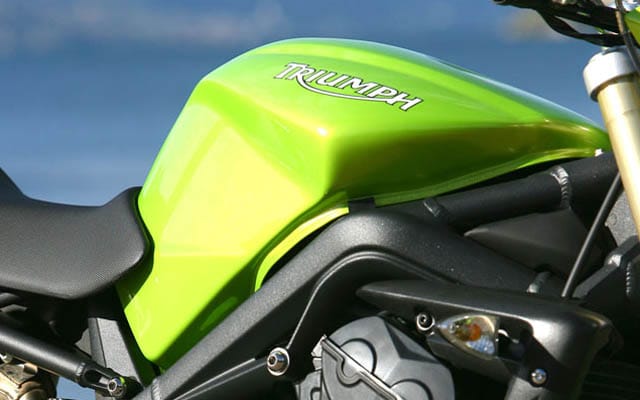 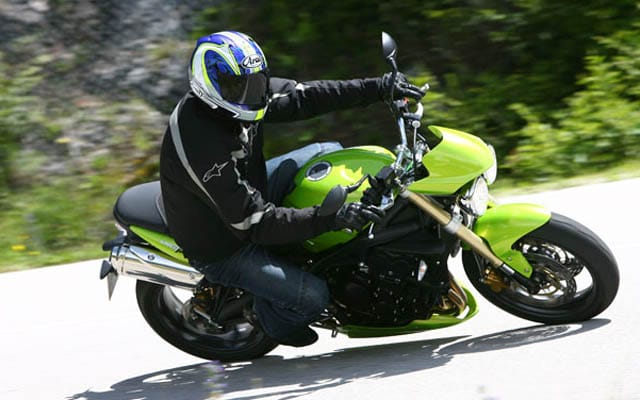 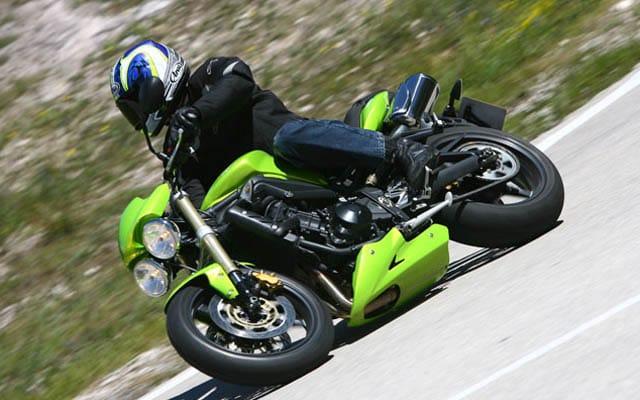 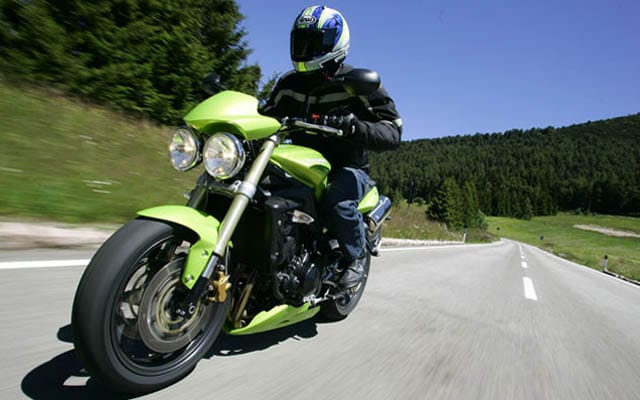 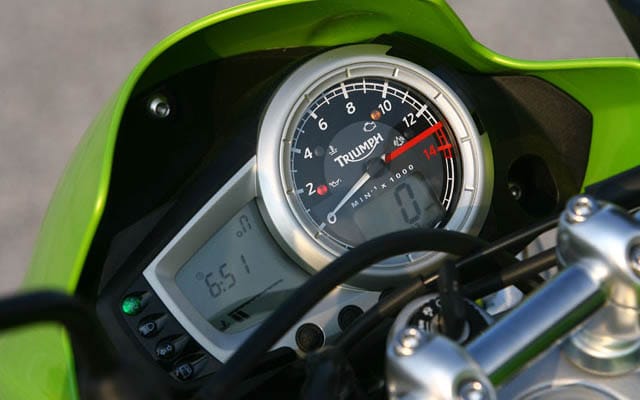 Adding a tubular handlebar and subtracting bodywork from sport bikes doesn’t always lead to road-going bliss, but Triumph finds the formula with the Street Triple. Winding our way up into the mountains from Lake Garda, Italy, on Triumph’s new Street Triple, the road funnels into a narrow strip, reaching a width that would not allow a North American SUV to pass. But that does not mean that we, or the other users of the road, slow down. Instead, each opportunity to pass slower traffic is pounced upon, because if you don’t go, the crazed Fiat driver six inches off your taillight will. But no matter how aggressive the driver, no car has a chance against this machine, and neither do most motorcycles.
With a displacement of 675 cc, it is fairly obvious if you at all follow motorcycling, that the $9,999 Street Triple is derived from Triumph’s Daytona 675 sport bike. It is a transformation common in motorcycling: take an agile and lightweight sport bike, peel off the fairing, add a tubular handlebar, lower the footpegs and re-jig the engine for more low and midrange power. It is a formula that sounds foolproof, but it rarely works out as well as imagined. As spectacularly effective as 600 cc four-cylinder sport bikes are on the track, reworking an engine meant to sing at 15,000 rpm for street use is daunting. Even the engineering might of the Japanese Big Four can’t quite pull it off, because you just can’t disguise an engine that is built to rev high—and powerbands that begin to blossom at 8,000 rpm do not an effective commuter make.

But here Triumph has a big advantage, because the lusty three-cylinder develops higher torque lower in its power band than a four. Altered cam profiles in the 12-valve engine are the only internal changes compared to the Daytona 675 (even the six transmission rations remain the same), and claimed figures show maximum torque of 51 lb-ft at 9,100 rpm. More importantly, Triumph claims at least 44 lb-ft of torque from 3,500 rpm to 12,300 rpm. Claimed crankshaft horsepower is 107, so figure on 90-something at the rear wheel. But enough with numbers, what does it all mean? If you need to pass the vehicle ahead or sprint to the next corner, you needn’t tromp down on the shifter a time or two to bring the revs up, just twist the throttle and go. The flexibility of the Street Triple’s engine is what impresses, and its pull in the low to medium rev range is reminiscent of machines with considerably more displacement.

Our route through the mountains is so twisty and tight that on a map it looks like the endless squiggle of a garter snake darting across a lawn. Second-gear hairpins allow revs to drop to just above idle, but the Street Triple pulls cleanly and strongly to its 12,650-rpm redline. It is this type of riding that plays to the engine’s strengths, and the lunge between corners is more reminiscent of open classers than middleweights—with one difference. The greater reciprocating mass inherent in large  displacement engines makes handling slightly ponderous when compared to the lighter engine internals residing in middleweights, and not even the big-brother Speed Triple, with its 1,050 cc three-cylinder, has agility approaching the little Street Triple. Switchbacks are handled with near bicycle-like ease, and if you’re distracted by the view down the mountain and lose track of your gear, ample torque saves the day. In many ways, the Street Triple is a better motorcycle than the Speed Triple; it may not have the outright grunt of the big bike, but it is less work to hustle down a twisting road.

Stringent Euro-3 emissions regulations (that the Street Triple meets) often have the negative effect of creating cold-blooded powerplants that hiccup and stutter at small to medium throttle settings, even with modern fuel injection. We have had test bikes that bucked and coughed in traffic so maddeningly that it took a fistful of throttle to clear their throat. It is impossible to know if Triumph tweaked its press launch fleet for richer running, but giving them the benefit of the doubt and assuming they didn’t, the fuelling of the Street Triple is near flawless. Perhaps the credit should go to the Keihin closed-loop EFI with three 44 mm throttle bodies. Sensors monitor throttle position, crank position, gear selected, road speed, atmospheric pressure and air and coolant temperatures. And if you’re still perfecting your wheelies, Triumph has thought of you, too; a tilt sensor kills the engine if the bike is dumped.

Triumph knew from the very beginning of the Daytona 675 project that they were going to build a Speed Triple-style variant. So while the world’s motorcycle press was at the Daytona’s Sepang launch in Malaysia, Triumph engineers were already road testing the mockup of what would become the Street Triple. This foresight—knowing that the fully faired Daytona would eventually be stripped of its trousers—prompted designers to hide fairing mounting hardware inside the frame, so there are no unsightly brackets cluttering the frame’s external surfaces. This allows the Daytona and the Street Triple to share the exact same frame and swingarm. Altering the swingarm mounting point (for which the frame is designed to accommodate) and tweaked offset on the tripleclamps make for handling a little more stable than the Daytona’s (rake is up one degree to 24.3 degrees, trail is 95 mm from 87 mm and wheelbase remains 1,395 mm).

One of the few criticisms of the Daytona 675 was for its tall seat, so the Street Triple has a new rear subframe that lowers the perch 25 mm to a more reasonable 800 mm (31.5 inches). Easing the leg’s reach to the ground is the narrowness of the machine (photographs do not entirely do justice to its slim profile) and from the saddle, it scarcely feels wider than a V-twin. Each millimetre that can be carved from seat height makes a motorcycle more appealing to the short legged, but Triumph pruned a little too much foam from the Street Triple’s seat. After spending the morning on a tester with a gel seat (a $288 accessory), the switch to a machine with a stock seat left me squirming miserably within 20 kilometres. Other hacks had similar complaints, and Triumph officials vowed to return to the factory to find out who pinched the stuffing.

Allied with the tubular handlebar (a rather cheapish looking chrome; I’d swap it for a brushed aluminum item), footpegs have been moved down and forward about an inch compared to the Daytona. It does not sound like so drastic a change, but the aid to agility and comfort is striking. A sport bike moves your weight down and forward over the front wheel, with a corresponding increase in misery inflicted on your wrists. But the standard-style riding position of the Street Triple, with your body slightly canted into the wind, is ideal for roadwork. Roundabouts in town made me wish I’d packed leathers with knee sliders, but don’t worry about those lowered footpegs—unless you just lost your World Superbike ride you’re not going to grind anything.

Suspension up front is a 41 mm Kayaba fork with 120 mm of travel, while the Kayaba rear shock has marginally greater travel. Settings are a good compromise between firm and supple, and even at elevated speeds, the Street Triple doesn’t wallow in corners. Brakes up front are paired 308 mm floating rotors with Nissin two-piston sliding calipers. A single 220 mm rotor with single-piston caliper handles the rear. They are strong but not supersport sensitive, and a good compromise for the street. Perhaps the only real trouble with the Street Triple is how to position it for sensitive North American buyers. It is svelte enough (at 167 kg/368 lb) and the controls are supple enough for riders of modest experience, but it is also a powerful, track-day capable machine, directly descended from one of the best thoroughbred sport bikes (the 2006 Bike of the Year award-winning Daytona 675). The Street Triple transcends its modest displacement and embodies a characteristic rare in motorcycling: a bike that can be many different things to many different people.