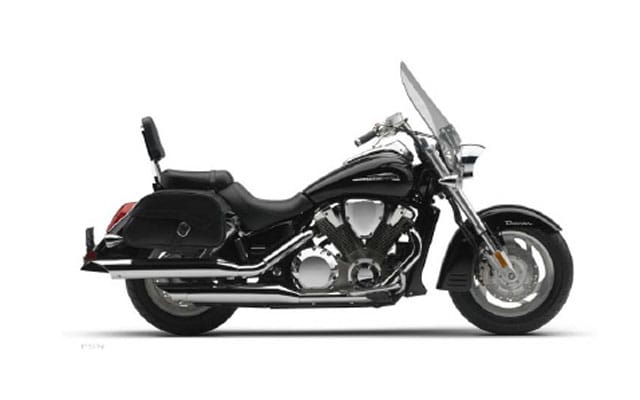 If you blinked, you may have missed the fact that the VTX1800 series was not in Honda’s 2006 lineup. Refusing to call it a discontinued model, Honda opted to say its biggest V-twin cruiser was on a one-year sabbatical—on hiatus if you prefer. Besides, carryover models were available in abundance. That hiatus has ended and the VTX1800 returns with three models reappearing, two disappearing and a new one is introduced. The returning models are the C and F versions, which are street-rod variations with bobbed fenders and racy wheels, and the N “neo-retro” model with tire-hugging fenders and fat front rubber. Gone are the S and R retro bikes.

The latest addition to the VTX lineup is the $20,499 VTX1800T tested here, equipped for touring with leather saddlebags, windshield and passenger backrest. Deeply valanced steel fenders wrap around fat tires mounted on beefy cast-aluminum wheels. Powering the Tourer, as it is called, is a 101 x 112 mm liquid-cooled, 52-degree V-twin powerhouse, claiming 106 hp at 5,000 rpm and 120 lb-ft of torque at 3,500 rpm. When we last tested a VTX on the Hindle dyno (CC, Jan. 2005) it produced 82 hp at the rear wheel with 93 lb-ft torque, and no internal engine changes have been noted since. Despite the difference between claimed versus actual power output, the 1,795 cc engine hammers away at the pavement from very low rpm when the throttle is turned. It provides a surprisingly vigorous forward push from just off idle, especially considering the machine’s substantial physical size and claimed 360 kg (783 lb) dry weight. The downside of hauling away from such low engine speed is a pronounced shudder that reverberates throughout the machine with each power pulse of the engine. Highway passing in top gear is effortless and quick.

Seating posture is upright and very relaxed with the handlebar rising and pulling back to meet the rider. The seat is flat, wide and amply comfortable for long-distance touring, and reaching the ground is only slightly inhibited by the width of the machine; it’s still quite easy to get both feet flat on the ground. Footboards provide a neutral, chair-like seating position, as well as the freedom to move your feet around. One item that is slightly comfort inhibiting is the one-piece heel/toe shifter that doesn’t offer the range of adjustment of a two-piece design or the option of removing the heel shifter for additional footboard space. Passenger seating is generous, and although there are no grab rails, the backrest assures a passenger stays on board when leaving a stop in a hurry. Ignition switch location requires a reach around and below the left thigh, which may look cool to a bystander, but a more convenient location on the fuel tank panel is preferred. Other cruiser-derived features are fat handgrips and wide-blade levers, which are non-adjustable and require man-sized hands to operate.

The windshield provides protection from direct windblast, but this type of classic, un-streamlined design causes continuous buffeting, shaking a rider’s helmet at highwayspeeds. At the end of the day, after an interstate hop from Miami to Daytona, it was still preferred to having no windshield, though once we stopped, we were glad the head shaking ended. It also induces a slight weave at speeds above 120 km/h. Engine rubber-mounting smoothes the ride (aside from the low-rpm quaking described earlier) and throttle response is immediate and smooth. Only at low speeds, where excessive driveline lash causes some abrupt on/off throttle transitions, does the VTX lose some of its overall refined feel.

Handling is ponderous at low speed, as the fat 150/80-17 front tire lays a hefty footprint. The combination of relaxed cruiser chassis geometry (32-degree rake; 163 mm trail) and a wide handlebar make steering response somewhat vague. Steering effort is light due to the leverage offered by the handlebar, yet the machine is slow to respond to rider input. At speed, things become more coordinated; steering is neutral with no effort needed to maintain a lean and front-end feel is more accurate, while the long 1,716 mm (67.5 in.) wheelbase provides solid straight-line stability. Enough cornering clearance is available to maintain an enjoyable pace, the wide footboards being the first to touch down.

Suspension response from the 45 mm non-adjustable inverted fork and twin, preload-adjustable rear shocks is compliant, though it must be stated that Florida is mostly devoid of bumps, potholes or any other suspension-taxing road irregularities. The occasional uneven expansion joint passed beneath the machine unnoticed.

Shift action from the five-speed gearbox is smooth with a solid feel at the shifter accompanied by an assertive clunk, affirming a gear change is complete. Clutch effort is heavy, but not so as to inhibit overall comfort—unless you’re crawling along Daytona’s Main Street midday during bike week. Fortunately, heat emitted from the engine is minimal, so inner thighs don’t bake while stalled in traffic.

Braking performance is exemplary from the Honda’s linked system. Two three-piston calipers squeeze 296 mm floating discs, while a two-piston rear caliper works on a large 316 mm disc. Normally, such a strong rear brake setup would cause premature lockup, but this doesn’t happen as the rear brake pedal also operates one piston in each front caliper. Leather saddlebags are more styling accoutrements than convenient touring accessories, and with time, they usually sag like geriatric testicles. This is unlikely to happen on the Honda, as an internal steel frame solidifies them and the lids are reinforced with a plastic inner shell. The lids shut tight with adjustable leather straps with snap buckles, while a snap at each end keeps them from flapping in the wind, though the bags are not watertight and pre-bagging items in plastic is recommended.

Fuel consumption on this latest VTX is better than what we’ve experienced in the past. We averaged 6.6 L/100 km (43 mpg), bettering the 7.5 L/100 km (37 mpg) we achieved on the VTX1800N we tested in June 2005. Custom details abound on the VTX1800T, from ample chrome engine trim, to bullet style turn signals (which, unfortunately, lack self-cancelling ability), to a sharply styled headlight nacelle, capped with a chrome visor. Mirrors offer an unobstructed rear view and the engine produces a rich, throaty tone becoming of a big-bore V-twin. Now that the vacation is over for the VTX1800, big is back in Honda’s lineup, and the firm hopes a rejuvenated interest in the mega cruiser will lead to something else that’s big: sales