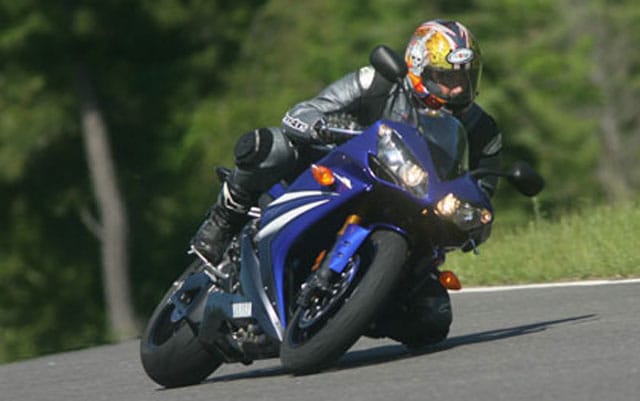 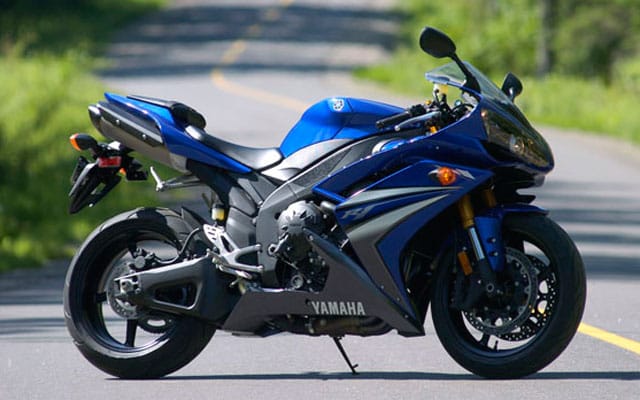 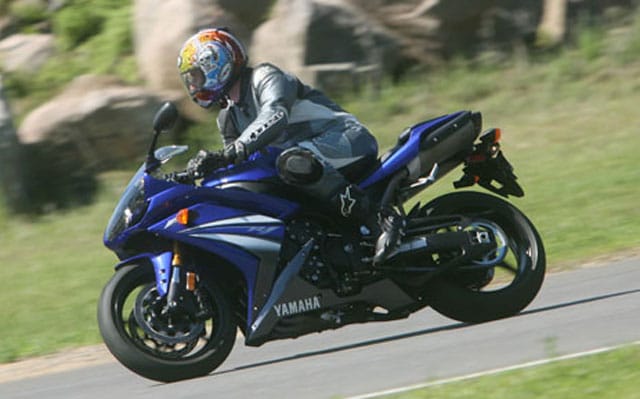 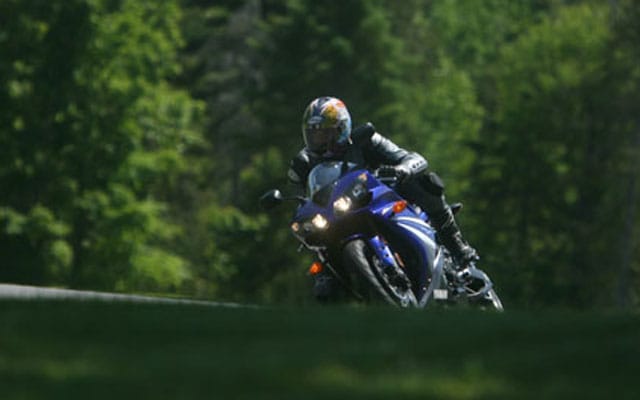 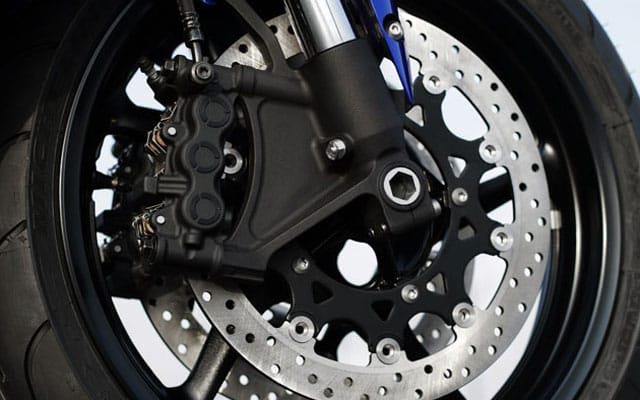 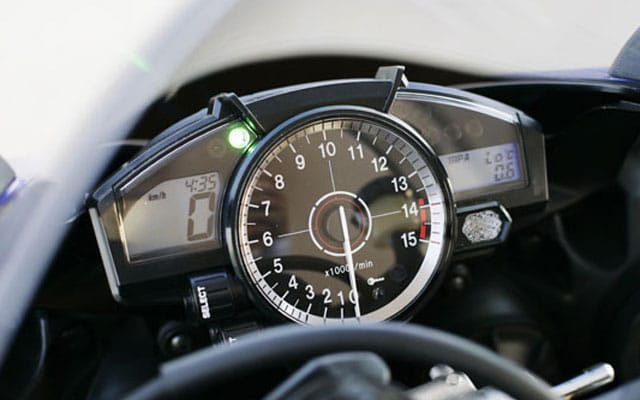 At Cycle Canada, we’re always looking for reasons to ride fast bikes hard. No arm-twisting was needed to convince us to attend a track-day weekend at Calabogie Motorsports Park (see sidebar) hosted by the Ottawa Safety council. We took Yamaha’s new R1 and Suzuki’s updated GSX-R1000 (full Gixxer test in an upcoming issue) for a thorough flogging around the technically challenging racecourse. As has become the open-class norm, improvements occur at a rapid pace, and the R1 was thoroughly worked over for 2007, after receiving minor upgrades only last year. Its engine underwent the most change, as it went from a 20-valve design to a more conventional 16-valve. Two 31 mm intake valves replace three 23.5 mm valves in each combustion chamber, while exhaust valve diameter remains at 25 mm. Intake valve lift is increased by 1.6 mm and exhaust lift by .8 mm. The reason for this change is improved combustion efficiency, as proven by Yamaha’s MotoGP effort, which took two world championships—and almost won a third—since 2004 using a four-valve design. The R1 has had five valves per cylinder since its 1998 debut and it has been a Yamaha feature since 1984.

Yamaha’s YCC-T fly-by-wire throttle works in conjunction with YCC-I variable-length intake stacks to improve midrange, which was weak on the previous model. Intake stack length is 140 mm below 10,500 rpm, which improves midrange power. Above that engine speed, a servomotor separates the stack halves, effectively shortening them to 65 mm, thus improving high-speed airflow and increasing power. The aforementioned engine revisions and the electronic control have vastly improved the powerband, with abundant power now available from 3,000 rpm, and although the midrange still doesn’t match the brutish punch of the GSX-R1000, the R1 packs a wallop in the upper rev range. From 8,000 rpm to redline, the R1 pulls with more ferocity than the ZX-10R, which is renowned as a powerhouse.

Accommodating this newfound midrange is a revised frame optimized for better chassis rigidity. With tire technology advancing rapidly, both on the racetrack and off, chassis engineers are constantly revising chassis flex in search of optimum traction, especially at the entry and exit of corners. An ideal example of this is Valentino Rossi’s 2006 racing season, in which early-season wheel chatter was traced to a chassis (which was basically unchanged from the previous year) that was incompatible with newly designed Michelins. The fix came in the form of controlling chassis flex by shuffling the rigidity of various frame components. The same formula is applied to the latest R1, as frame rigidity is reduced 50 per cent vertically, 24 per cent sideways and 25 per cent torsionally, while torsional rigidity in the swingarm is increased 30 per cent. The swingarm is also lengthened 16 mm. These changes improve front-end feel at turn-in and aid traction accelerating out of a turn. During last year’s open bike shootout, all of the testers, including multi-time Canadian road race champion Steve Crevier, noted the R1’s reluctance to turn, running wide at corner exits with a slight tendency to shake its head on hard acceleration. All of these issues are corrected on the new R1, as it turns in with little effort—even when hard on the brakes—and holds a tight line throughout a corner. Trail increased to 102 mm from 97 mm has also helped eliminate its tendency to headshake, as it now tracks true even when the front tire leaves the ground on acceleration.

The spring rate is increased by 2.5 per cent and 11.5 per cent in the fork and shock respectively, and the resulting firmness provides excellent compliance on the racetrack without making a noticeable difference in street comfort. 2007 R1’s are available with either Pirelli Diablo Corsa or Michelin Pilot Power radials. During the bike’s press launch at Laguna Seca (CC, February 2006), editor Costa Mouzouris reported that the Pirelli Diablos performed flawlessly after a day at the track and exhibited little wear. Our test bike is equipped with Michelins, and we afford them equal praise, as they provide great feedback and near-DOT race tire grip. On the street, the engine is tractable and smooth, with a throttle that is easy to modulate, even through low-speed corners. Seating accommodation is about as good as it gets on a supersport, which is to say it will accommodate a contortionist well, though the R1 offers a bit more room than the GSX-R1000. Besides, if comfort is a higher priority for you than the ultimate in high performance, you can always opt for Yamaha’s FZ1, which is no slouch on winding roads.

About the only criticism R1 riders could make concerned its brakes. A single-finger squeeze on the lever provides enough braking power to make blood rush to your face. While swapping between machines at Calabogie, the most common advice given to riders mounting the R1 after getting off the GSX-R was: “Remember to watch the brakes.” Brakes on the R1 are the strongest we’ve seen (we have yet to ride the Ducati 1098, which also reportedly has blood-vessel-popping binders). Sumitomo radial-mount six-piston monobloc calipers grip discs that, at 310 mm, are 10 mm smaller in diameter than on last year’s machine. A class-standard (except for the Honda CBR1000RR) slipper clutch takes the edge off braking, providing seamless corner entry. It is amazing how Japanese manufacturers can produce such great-handling, high-performance machines and yet still find something to improve. This year’s R1 is a marked improvement over last year’s, something Steve Crevier has surely picked up on, having won a round of the Parts Canada Superbike series and, at press time, lies second in the Superbike championship aboard a 2007 Yamaha R1. We’re certain that, like Crevier, riders of the new R1 will appreciate the changes, especially if they take it to the track.

From the saddle
Riding a track as demanding as the new circuit in Calabogie, Ont., on a machine as powerful as the R1, was a challenge, especially since I was nursing injuries from tossing myself over the handlebars at Mont Tremblant the week before. Learning all those blind and decreasing radius corners taxed me so much that I would have preferred a 600 or a 250 or even a scooter. The problem is that I need time to think and the R1 does not give you that time. The soft midrange of the previous version is gone, so straits are gobbled with the flick of the wrist—no time to relax here. The riding position is more spacious than the GSX-R that we tested at the same time, so I like the R1 as a street bike. However, on the track, the
GSX-R seemed more forgiving and the feedback more predictable. The R1 strikes me as a machine for an expert, a claim backed up by watching Steve Crevier win a round of the Parts Canada Superbike Championship at Mosport this past July. I still think it’s the best looking 1000 (nicer, even, than Ducati’s 1098), but unless my humble skills unexpectedly blossom, me and the R1 may never come to terms with each other.
—Neil Graham

Last year, I was fortunate enough to have ridden Valentino Rossi’s YZF-M1 MotoGP racer in Valencia, just a couple of weeks prior to riding the new R1 at its press launch at Laguna Seca. Although the venues I rode the two machines at differed, I was amazed that the gap in performance of the street bike and the racer was so close. In fact, brakes on the R1 are stronger than those on the M1, at least in terms of feel and effort. Of course, the M1 I had ridden had 250 horsepower, it had more carbon-fibre and trick, hand-fabricated components than can be imagined, and exclusivity that even the rarest of the exotics can’t match. However, one thing the R1 has that the M1 will never have is a licence plate.
—Costa Mouzouris