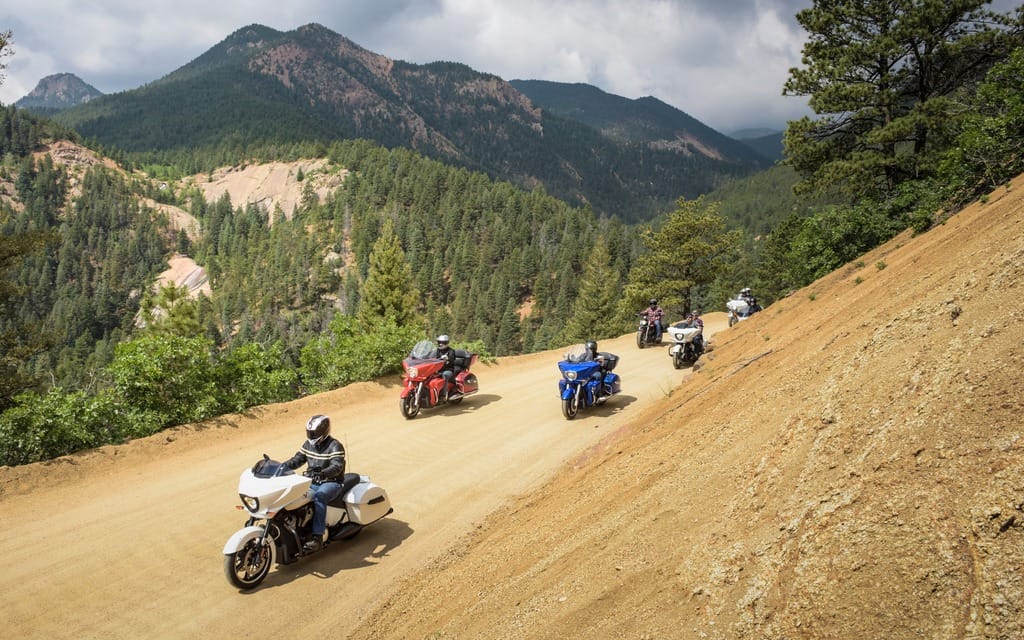 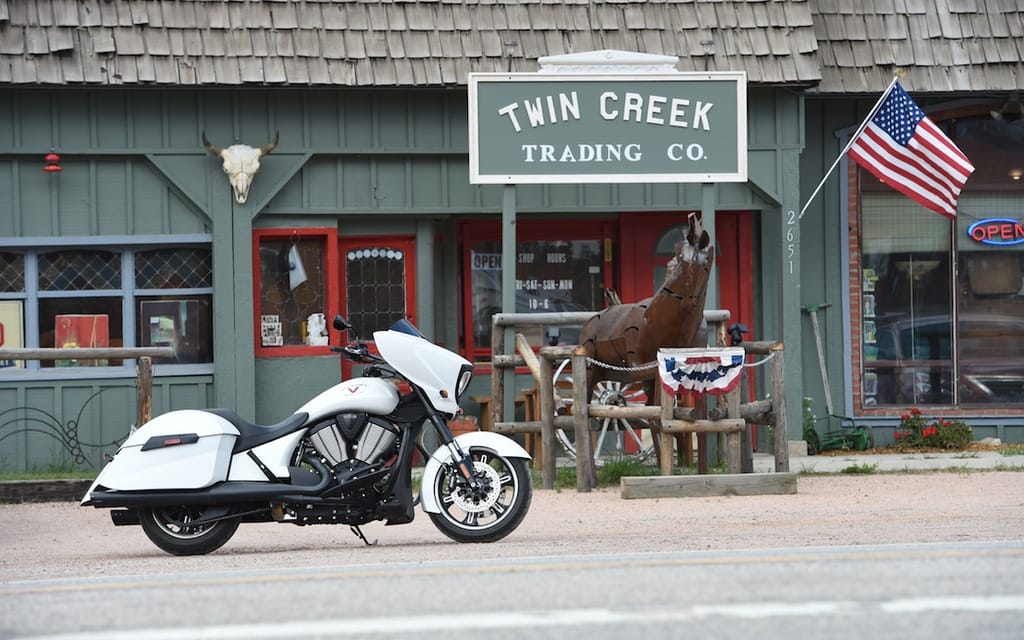 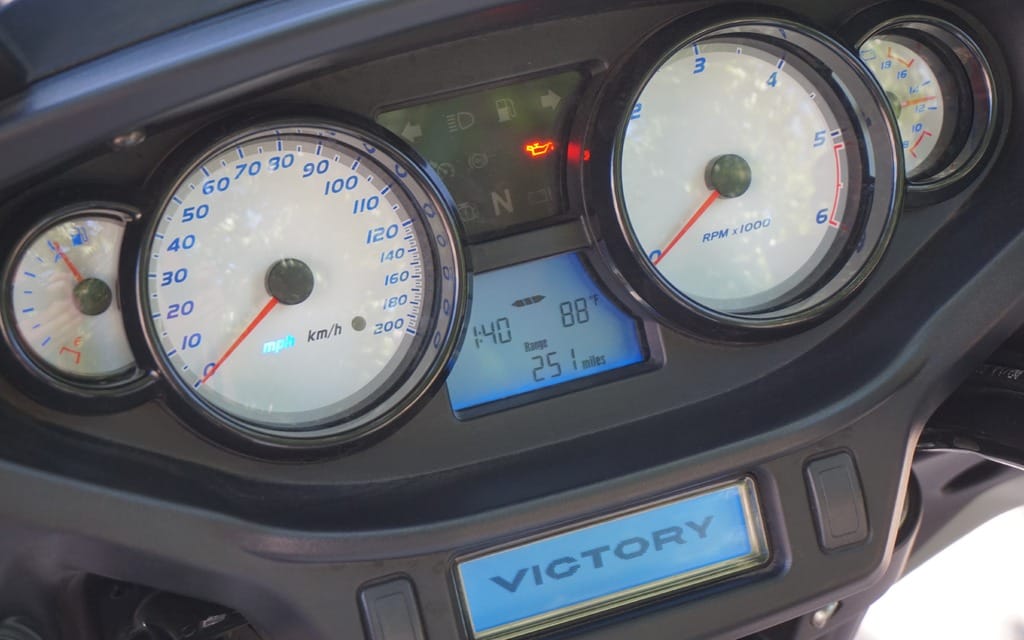 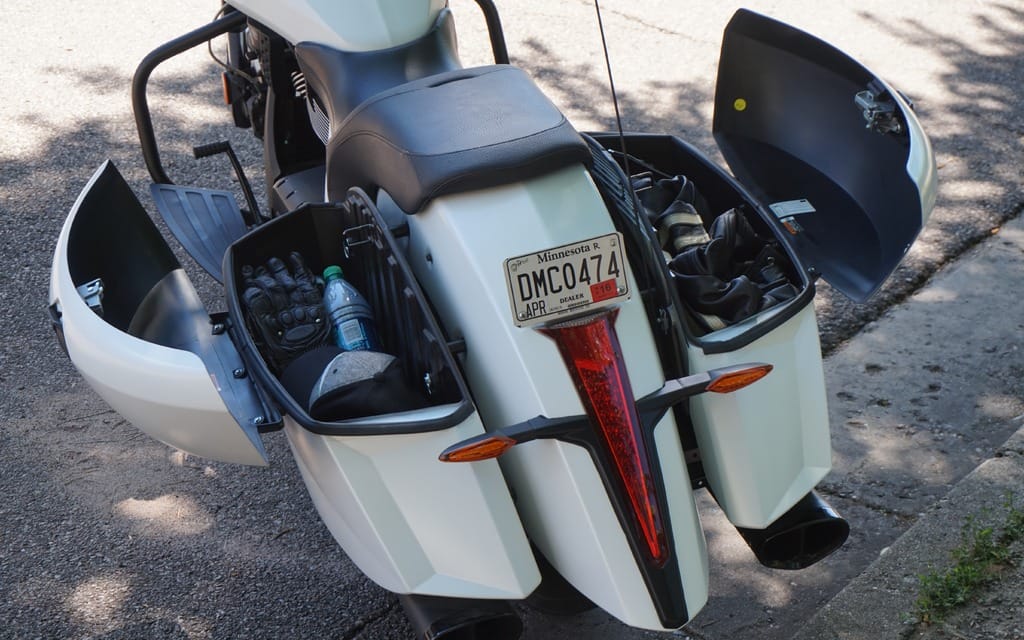 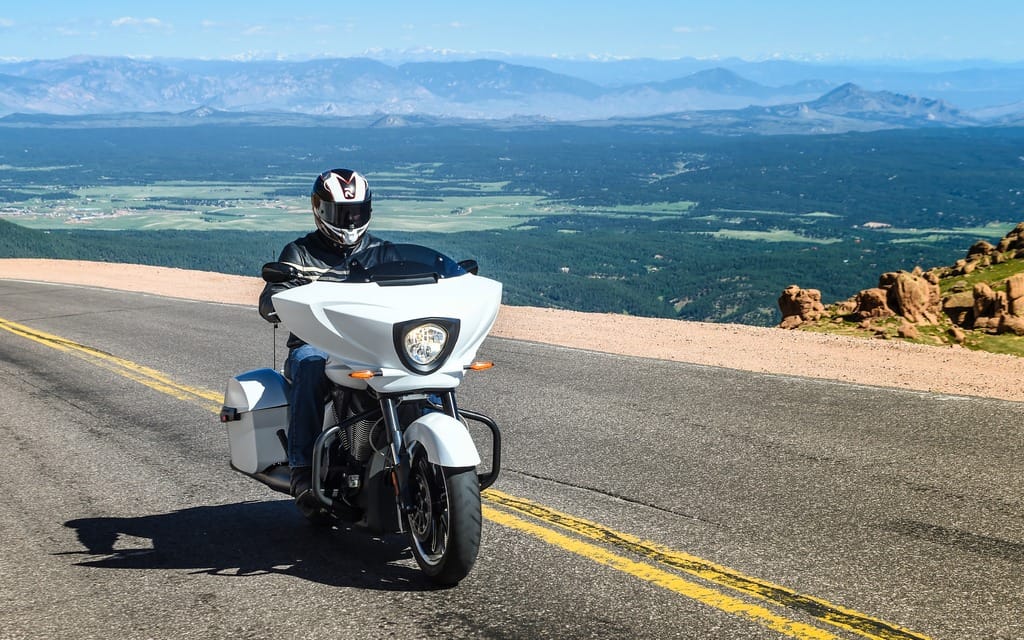 Hard miles on a Victory staple

Electric may be part of the future, but petroleum-powered cruisers are Victory’s here-and-now – and none more so than the Cross Country. “It’s our best-selling model,” says Victory PR manager Van May. (There’s a touring version with top trunk, but the public prefers the bagger, he says.) The Cross Country is long, low, and loud, a prototypical specimen of “American muscle.” What better mount for cruising the Colorado countryside?

Victory’s guided ride calls for a loop out of Colorado Springs, culminating in an ascent of Pikes Peak. In a segment suffused with sameness, Victory baggers stand out like heavy metal head bangers in a hippie drum circle. I select a Cross Country with an easy-on-the-eyes white paint scheme. (Colours range from grey to garish — especially if you stray from the Cross Country [$22,699, or $21,499 for the brooding 8-Ball version] to the Magnum variants [$25,999–$26,799]). Admittedly, the Cross Country’s futuristic styling isn’t for everyone, though during my stint it grows on me in a War of the Worlds tripod killing-machine kind of way. (The angular bar-mounted fairing fends off the wind well, but the shorty windscreen creates some chop at speed.)

The wide, low (667 mm) seat is cushy and comfortable, narrowing enough at the tank to aid shorter riders in reaching the ground. Although the riding posture is upright and the wide, swept-back handlebar puts tiller-like grips within easy reach, forward-mounted footboards place all the rider’s weight on the tailbone (my bum is numb within an hour). With rain gear and warm layers stowed in roomy saddlebags (lockable, and easily worked with one hand), I turn the key in the ignition (located on the left side of the engine), thumb the starter, and the bike shudders to life.

Victory’s 1,731 cc Freedom 106 air-cooled V-twin animates the Cross Country, feeding oodles of stump-mulching power to a chunky 180/60 rear tire via carbon fibre-reinforced belt drive. Clutch pull is moderate and some effort is required at the shifter to clunk through the gears, though the sense of solidity and strength exuded feels appropriate. We trundle out of Colorado Springs in a long rumbling line and make for the mountains.

Manufacturer-organized routes are typically selected with an eye to flattering the machine, placing it in an environment where it excels. For cruisers, that means straight sections and flowing sweepers — which is why I’m surprised when we eschew smooth pavement for a rippled gravel road strewn with potholes near Cheyenne Mountain. It’s an absurd test of the Cross Country’s suspension (43 mm inverted fork, single air-adjustable gas shock), an environment more suited to an adventure bike than a bagger. Even so, decent suspension travel (130 mm front, 120 mm rear) allows the Cross Country to roll smoothly over all but the worst bumps, albeit at a snail’s pace.

Back on the blacktop, speeds increase. The engine’s ample torque provides a hard and continuous pull throughout the rev range with a pleasant amount of vibration transmitted through the seat — enough to remind you you’re on a mighty powerful bike, not so much that you’re shaken to pieces. The world slips smoothly past while cruising at highway speeds in sixth gear, the engine ticking along around 2,500 rpm at 120 km/h. Roll-on is sluggish in sixth, but dropping down a notch or two dispatches traffic with ease.

Controls and instrumentation are clear and functional, with idiot-proof analogue gauges flanking an LCD that shows pertinent information (time, temperature, current gear, and more). Info is toggled using a trigger on the left switchblock, which is also home to intuitive stereo controls. AM/FM radio is standard, and an auxiliary cord to hook-up an MP3 player or iPod is located in the right saddlebag. Cruise control is optional.

The Cross Country is perfectly suited for cruising the long, flowing sweepers surrounding Victor and Divide. It holds its line at a loping pace, although the rear tire tends to follow cracks in the pavement like water seeking the lowest point of elevation. When the surface is smooth, the bike is on rails.

And when the road doubles back on itself, as it does again and again during the 156-turn ascent of Pikes Peak, the Cross Country surprises with its suppleness. Turn-in is quick considering its lengthy 1,670 mm wheelbase, and steering remarkably light and responsive given its overall size (a stiff two-piece cast-aluminum frame is a boon for the bike’s handling). But while the Cross Country is competent in the curves, its Achilles’ heel — as it is for almost every motorcycle in this segment — is revealed in the hairpins. Limited cornering clearance causes footboards to touch down at anything more than a modest pace; a scraping serenade echoes all the way to the 14,110-foot summit.

Which is where I notice the fuel level in the 22-litre tank is dangerously low. Once the 18-inch front tire is pointed down-peak I shift into neutral, hit the kill switch, and let gravity do the rest. With a hefty dry weight claimed at 345 kg, the Cross Country accumulates momentum with the force of an avalanche. There’s little room for error on a mountain road with no run off, but the bike’s sure-stopping braking system (dual 300 mm floating front rotors with four-piston calipers, 300 mm rear rotor with two-piston caliper) keeps the Cross Country from colouring outside the lines. (Though my bike does without ABS, it’s an option.) The necessity of freewheeling becomes an exercise in carrying speed smoothly through corners. Aside from the whirr of the belt, and brake pads rustling on rotors like sand shifting in surf, the descent is almost silent — a surreal experience on a muscle-bound American bagger.