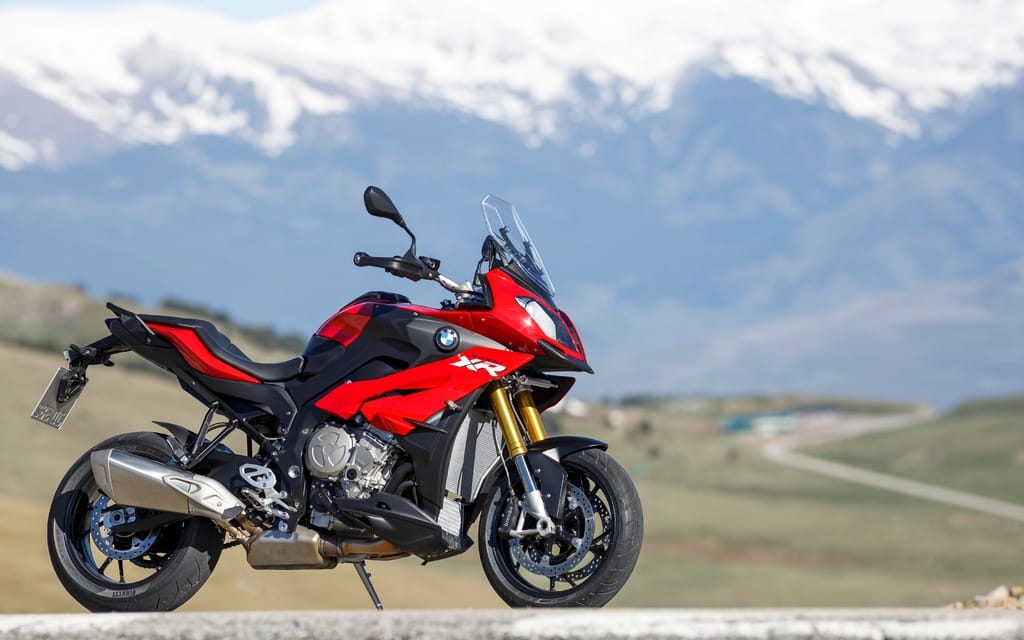 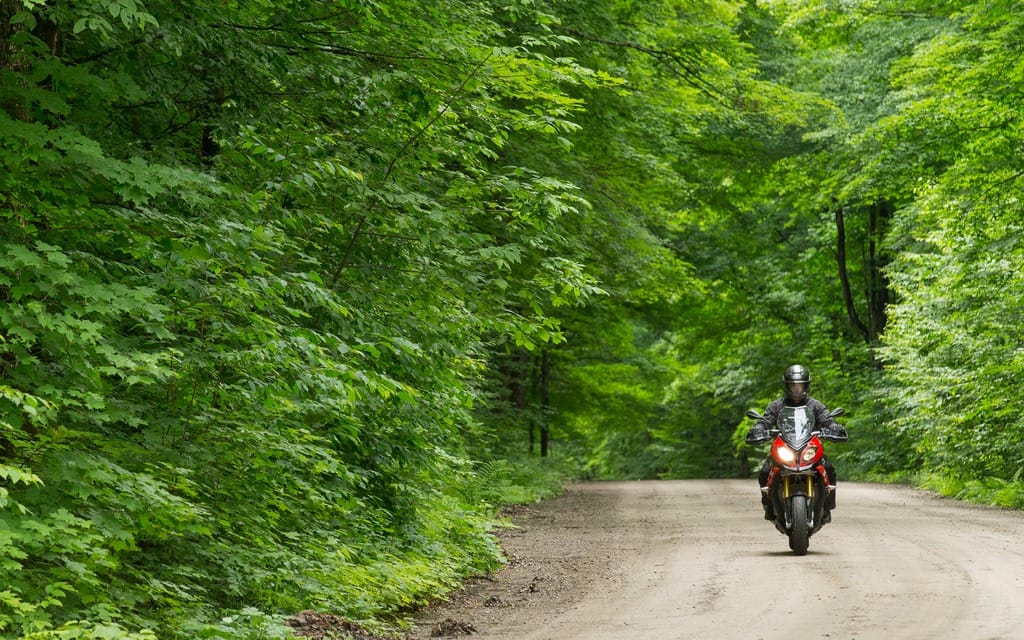 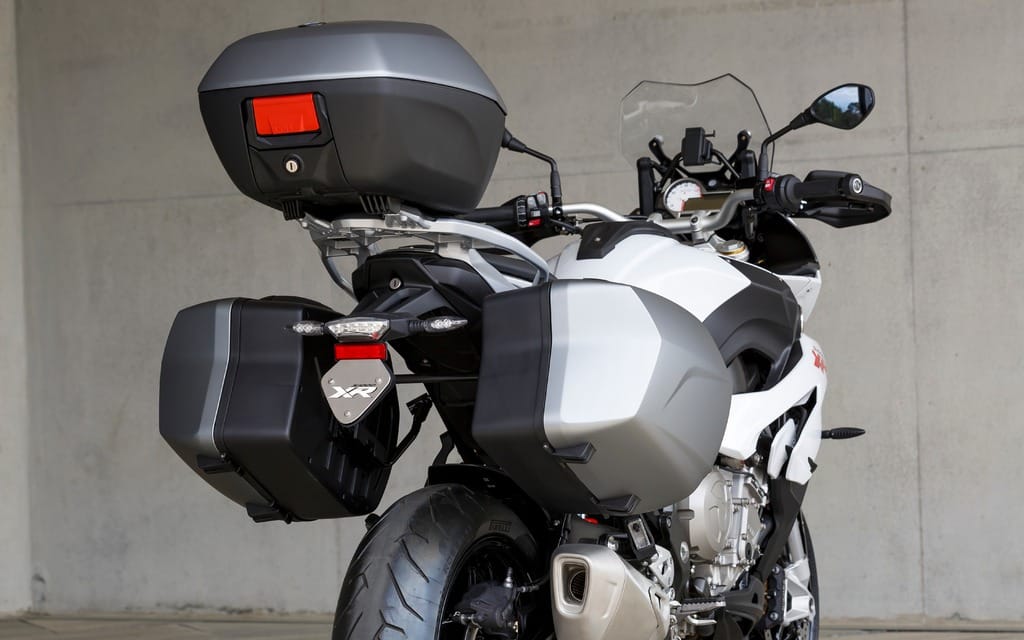 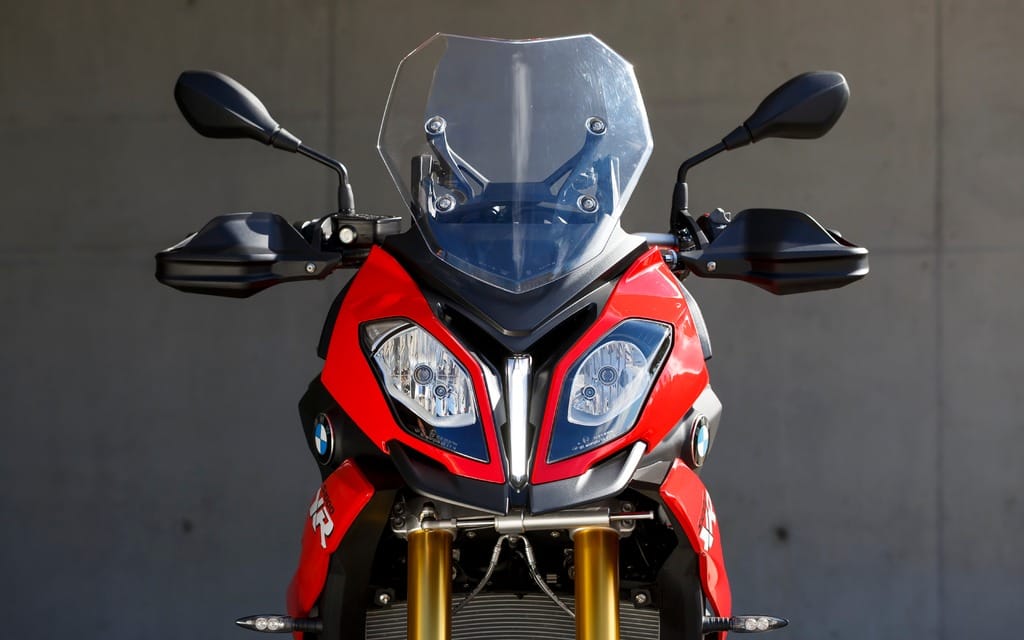 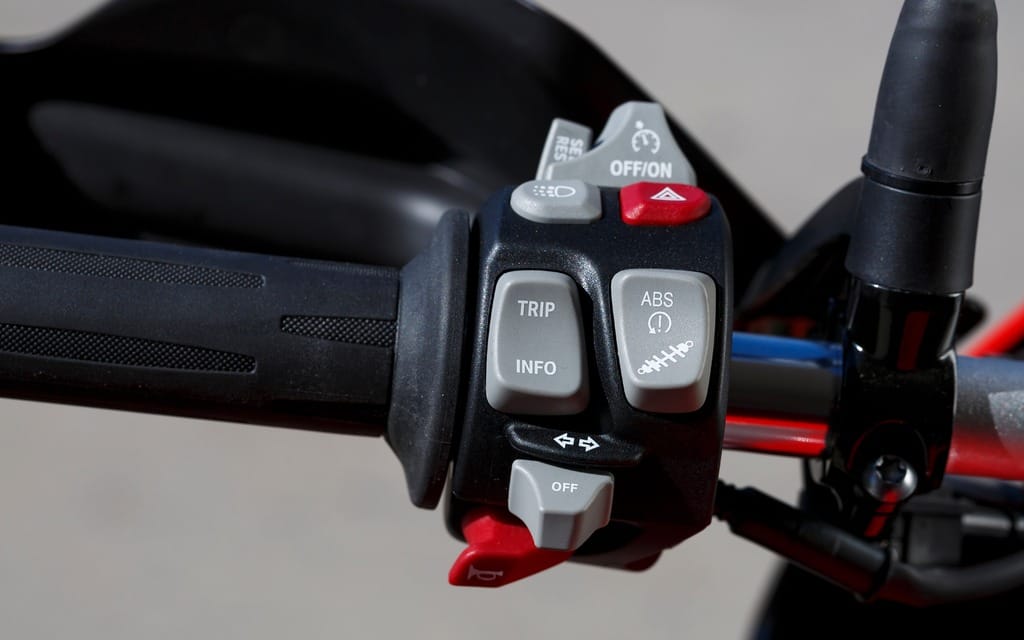 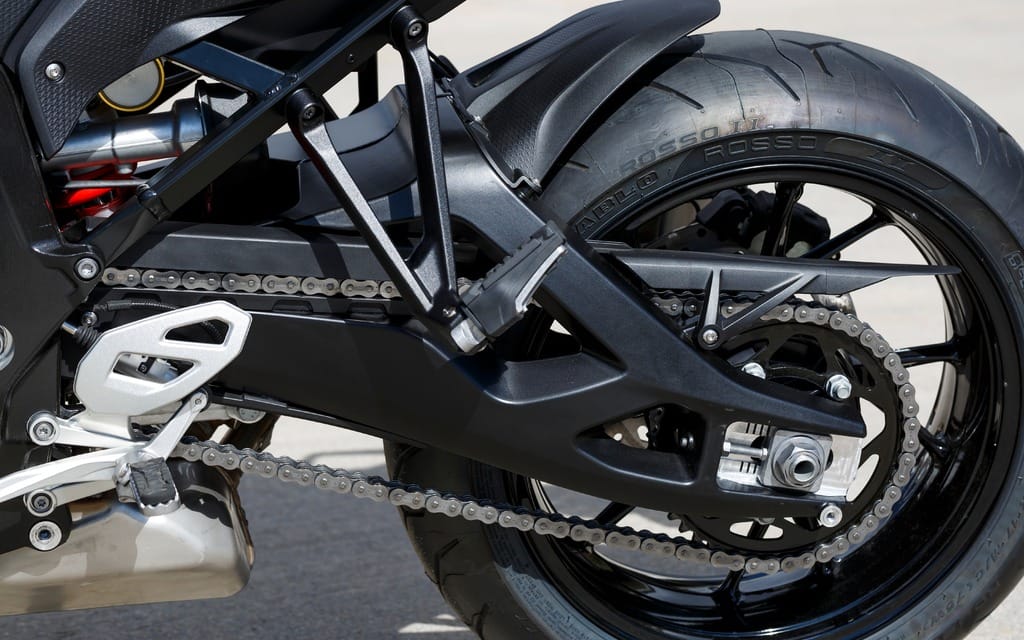 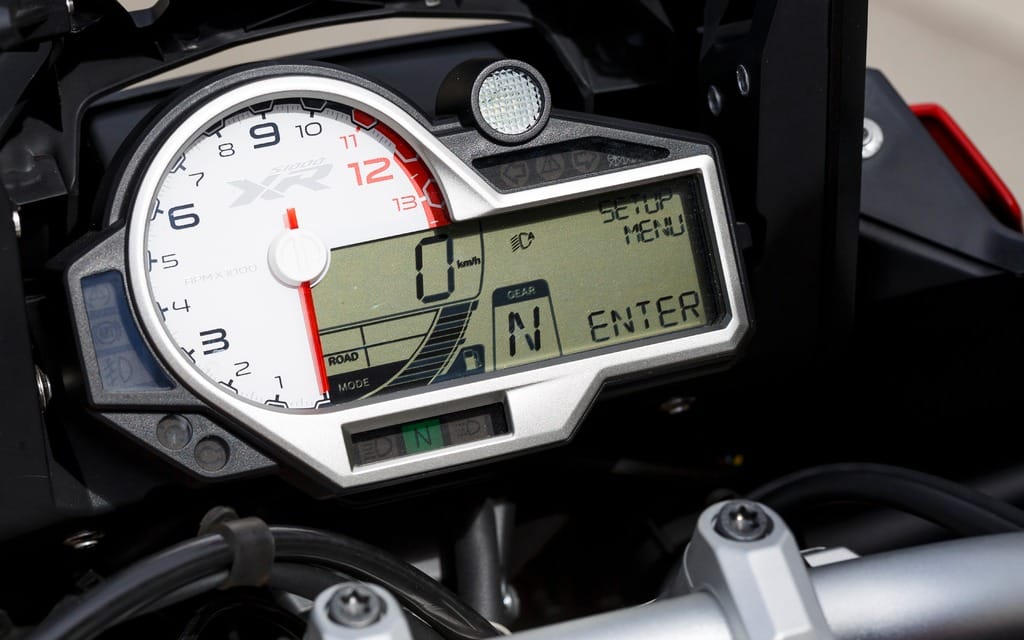 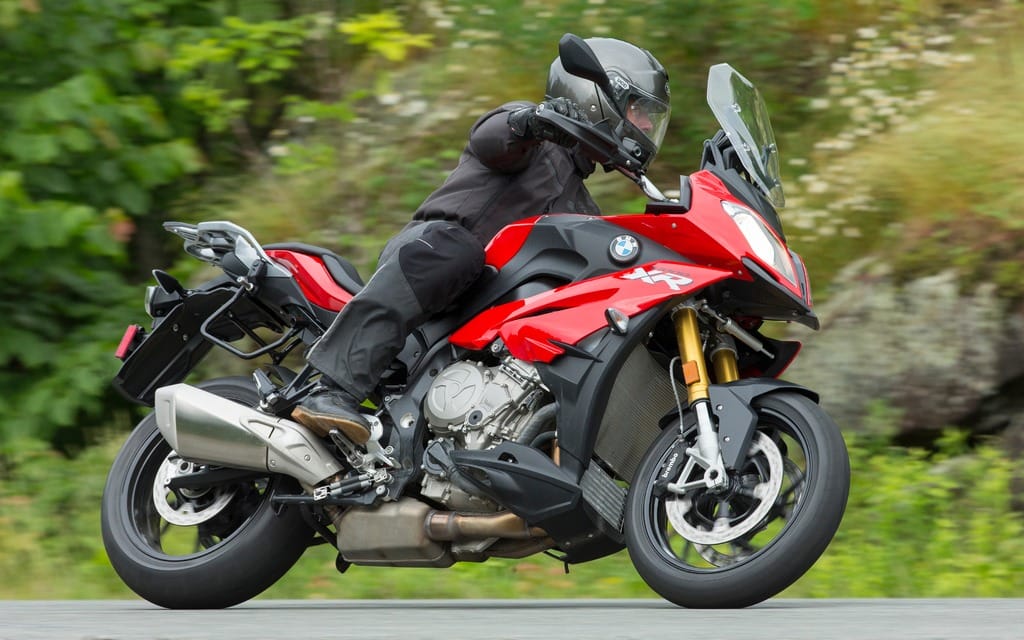 The S1000XR adds echoes of GS to BMW’s superbike

A man can only take so much. After following David Booth all morning, I pull out of line, hold the throttle of my BMW S1000XR full on, and gallop past the disgraced former Cycle Canada columnist and our press launch guide Gina and her full head of succulent hair. Ah, freedom from the tyranny of Booth’s wake and Gina’s mane. Press launch etiquette maintains that hacks stay in line behind the group leader, and even the dimmest of wits rarely challenge this unwritten rule, because often we’re in a part of the world where we’re unfamiliar with the roads. But not this time. After 11 years of traipsing around the world to press launches, this launch is an oddity: the first ever multi-nation event in Canada.

But back up a little to that pass of mine. My desire to burst forth was based on my recognizing a road that I’d ridden years before but that I’d entirely forgotten. It was like seeing as an adult a beautiful woman in the street and instantaneously recovering a lost memory that you’d played whack-a-mole together at the fall fair on the Labour Day weekend before the 11th grade. But my reverie was short-lived. My exuberance, as has been so often the case, was ill timed. The road surface had just changed from pavement to dirt, and with a full head of steam I charged down the rocky road to discover that immediately after the pavement resumed there was a tight corner. This required rigorous braking that resulted in much tail-wagging of the BMW, and then around the bend and off I bolted in search of a life-changing encounter with an OPP officer.

What was most impressive was that the S1000XR was fully at ease with my juvenile sprint, as this is not an adventure touring motorcycle in the GS vein. BMW calls it an “adventure sport” bike, which means, of course, absolutely nothing of significance, except to reinforce the recent trend that the manufacturer of each new motorcycle must create a category in which their machine — and their machine only — resides.

Even without BMW’s meddling, it’s fairly straightforward to understand where the XR fits into the motorcycling universe. With 17-inch rims and wide tires, it’s obvious that this is a street bike that has adopted the riding position of a dirt bike. And bully for them. With a wide handlebar, low footpegs, and a sensible saddle (well, sensible except for the odd-for-BMW quirk that it isn’t two-position adjustable), it’s the most rational way to sit on a motorcycle unless you’re about to head out for superbike qualifying. (Hang on just a second. Let me reconsider that statement.) As anyone with the slightest comprehension of numbers and letters has already determined, the S1000XR is derived from the horsepower-king S1000RR superbike, and, given the state of the pavement at what passes for a roadrace course in this country, an elbows-up, foot-down, motocross-helmet-and-goggles approach just might be the ticket to the pole position.

While the S1000RR was the first in the line, the S1000XR is mechanically closer to the S1000R roadster. While people who should know better often complain of the detuning of sportbike engines for use in street-only bikes, in this case only the ill-informed would take umbrage at BMW’s decision. The S1000RR superbike has achieved its Hoover Dam horsepower levels at the expense of good old midrange torque, but the S1000R-slash-S1000XR variation of the 999 cc inline four allows an owner to use hackneyed terms like “stump pulling” with some merit. (Just don’t let us catch you saying it, unless, of course, you’re actually pulling stumps. In which case send photographs.)

BMW claims 160 horsepower at 11,000 rpm and 83 lb-ft of torque at 9,250 rpm, and while those numbers are lofty (and quite possibly true, given BMW’s history of downplaying actual horsepower levels) so too are the rpm levels at which they’re reached. In practice, out on the road, the engine makes you want to haul ass. Which is fine by us, except that its stout gearing and close-ratio gearbox (shifts like a charm, by the way) is more superbike than superslab.

At 120 km/h the engine is slightly buzzy in top gear, but maybe my reaction to the engine is based more on how the discussion is framed — or, more precisely, what kind of frame houses the engine. (If you’re wondering, the frame’s a variant of the S1000R item, which is itself derived from the S1000RR’s unit. The XR has a shallower steering head angle and a slightly longer swingarm than the S1000R.) In a superbike you’re not aware of vibration unless it’s the kind that makes feet vibrate off footpegs or fingers go numb — and the S1000RR has neither. But on the street, at constant throttle settings and with some regard for the speed limit, you perceive motorcycles differently than you do at a breakneck racetrack tempo. In this manner the S1000XR is reminiscent, in spirit, of Yamaha’s R1-based FZ1.

The selection of the Muskoka region north of Toronto turned out to be ideal for the launch, as many of the good roads are poorly surfaced, and some of the best roads have a surface — in some sections — that’s totally gone to pot. With 150 mm of front suspension travel and 140 mm of rear travel, this is a machine that isn’t afraid of potholes.

The S1000XR is outfitted stock with antilock brakes and two riding modes (road and rain). Stability control, too, is stock. The launch bikes are outfitted with optional electronically adjustable suspension, but perhaps in sympatico with the muscular engine that powers the beast, the settings are biased on the firm side. Over Muskoka Cream Ale on the evening after our ride, many of the hacks I conferred with admitted that an orange-slice-floating-in-Jell-O setting to the suspension would be a welcome option as a long day in the saddle draws to a close.

When our tour guide charted our route I was alarmed to see that sizeable dirt sections had been included in the ride. My fear was twofold. Firstly, probing the deep woods at the end of June means angering the primary citizens of the north: mosquitos. Secondly, while bikes of this ilk (Multistrada, V-Strom, Versys, et al) adopt the stance and riding position of a proper dirt bike, they are not, in any way, dirt bikes. Not at a clamed 228 kg and with a superbike engine down below.

What a surprise it was, then, to realize how wrong I was. While only a fool would attempt a single-track trail, the surprisingly smooth dirt roads (many were in better condition than the paved ones) we navigated were easily gobbled by the S1000XR. And we weren’t just pottering along. One dirt concession road had triple-jump worthy whoops that, with good timing and with a big mitt of throttle, would allow you to float the front end over the hills and throw a rooster tail of dirt from the back end as the bike sank down into the valley.

Even riders whose off-roading consists of nothing more treacherous than a trip through a pothole in the Starbucks parking lot will complain vigorously if ABS can’t be deactivated. I don’t understand the compulsion. (Calm down, the S1000XR allows you to prove your manliness to the world by switching ABS off.) For my off-roading I switch to rain mode and ride the beast with the abandon that I would an XR100. Maybe it’s an affront to the purists, who believe that only a man’s right wrist should determine his fate, but while I’m willing to lay it on the line on my lightweight, 50 horsepower flat-tracker, three times as much power and more than twice the weight of my racebike necessitate a different approach. After I pass Booth and our leader Gina, and with that tight corner coming into view, I hammer the brakes — front and rear — and let the machine take over. And though the back end of the bike wags like a fish’s tail, antilock braking saves the day, as does throttle control when I power-up at corner exit. How well the S1000XR handles dirt roads on street-only tires is a revelation. The credit is not entirely due to sophisticated electronics. The dirt-bike seating position fosters confidence and control, and the ample and predictable torque from the engine make it a willing partner in the dust.

As is the norm, launch bikes are outfitted with all the mod cons, but BMW allows purchasers to tailor the S1000XR with a pair of factory accessory packages. The Touring Package has grouped dynamic ESA (electronic suspension adjustment), a luggage rack, luggage brackets, heated grips, a centrestand and “prep” for GPS together. It adds $1,625 to the bike’s 2015 price of $17,600. If you’re a flamboyant personality, like Mr. Booth, another option is Dynamic Package 1 ($1,200), which gathers dynamic traction control, gear shift assist pro (shift up and down without the clutch), ride modes pro, cruise control, and ABS pro (otherwise known as cornering ABS, as the bike’s lean angle is used to calculate the amount of appropriate brake pressure). Then all you need to do is add a set of panniers and a top box and you’re ready to go. (And yes, V-Strom owners, we know. You paid less.)

Given BMW’s history with street bikes that look like dirt bikes (the genre-defying R1200GS) it’s only natural that the two machines, especially since they share a general visual language, should be compared. But they’re nothing alike. The S1000XR does not have the flat-twin-powered R1200GS’s easy, relaxed gait. The XR is derived from a superbike while the GS from a street-biased engine. Isn’t choice a wonderful thing?