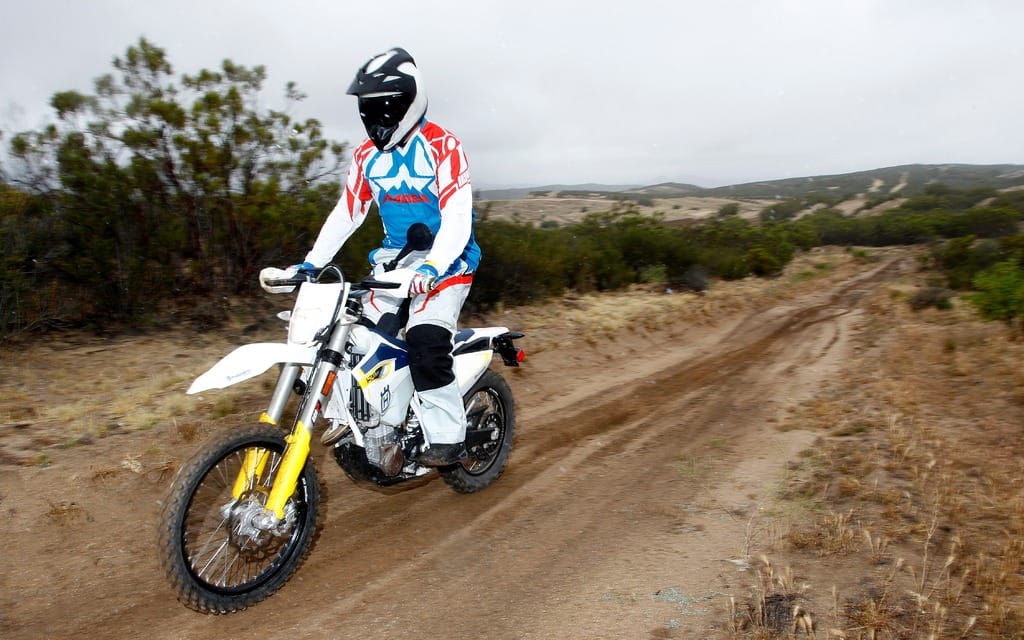 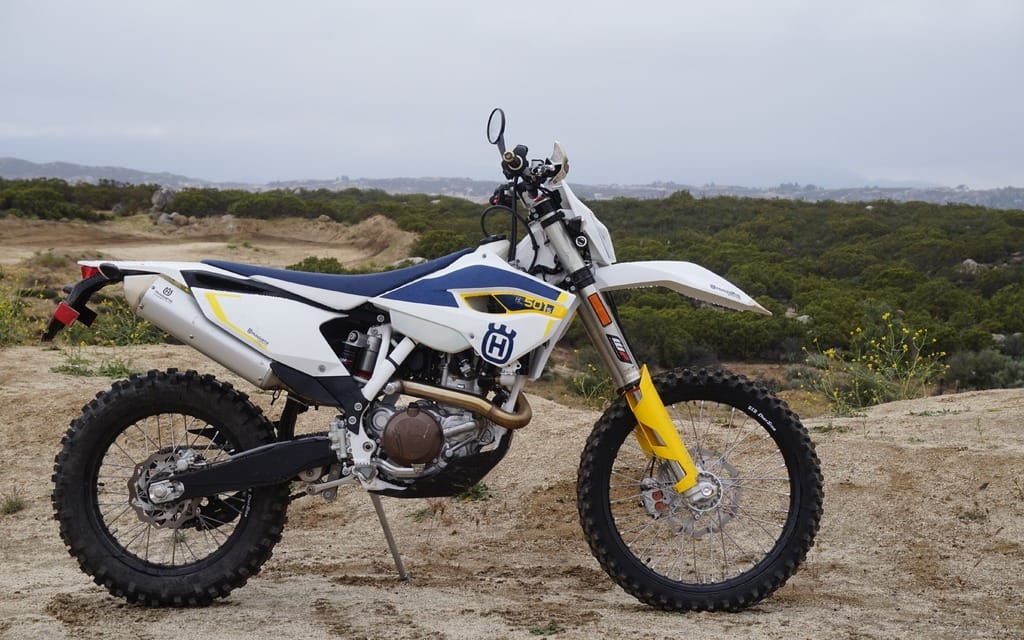 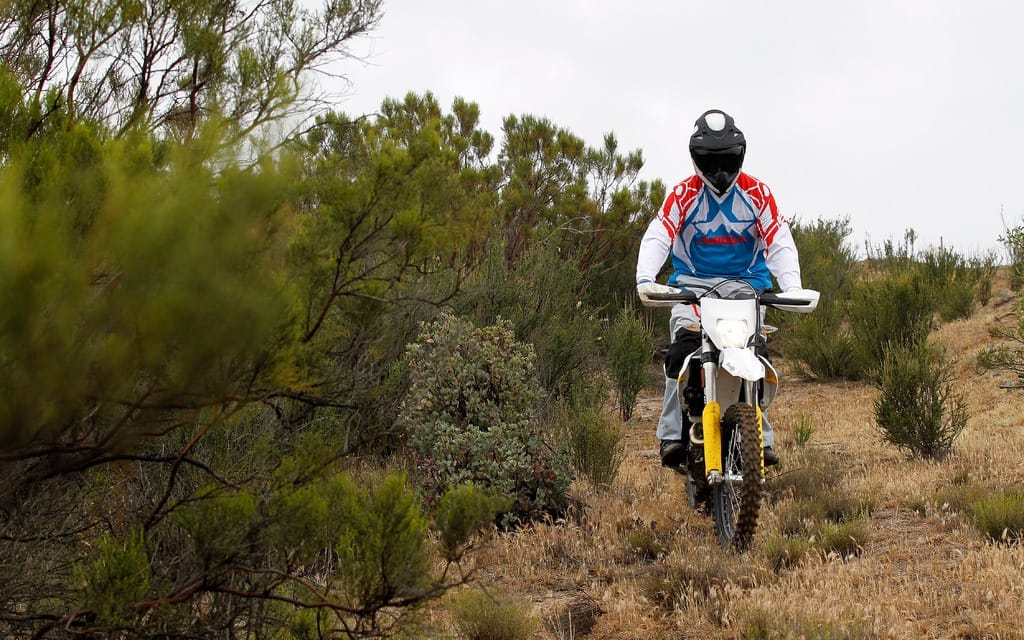 I must be cursed, I’m thinking, as I round a blind corner on a dirt road in Southern California hill country. At least that’s what I would be thinking, except there’s no time. A Chevy Suburban is bearing down on me. The driver has cut the corner and we’re on a collision course at the apex. I jab the brake pedal to step the rear out and aim the front tire at a wedge of space the size of a pizza slice between the SUV and the cliff face. Then I close my eyes.

Enjoy this review, because it may be the last time I’m invited to a press event involving Husqvarna or sister company KTM. Excluding the dirt bike tumbles of my misspent youth (has anyone not misspent their youth?) I’ve had three motorcycle crashes. Two were at KTM press launches (1190 Adventure and RC 390) and now, at my first press ride for white-blue-and-yellow-is-the-new-orange Husqvarna, I scratch up a spiffy dual sport. I’m three for three with KTM umbrella brands. How did it come to this?

It’s Dick Burleson’s fault — not for the crash (he was sheltering from the rain under a canopy at California’s Cahuilla Creek motocross track — our departure point — when that happened), but for my being on Husky’s bigger dual sport, the FE 501S. Burleson, who rode Huskys to eight consecutive American National Enduro titles from 1974 to 1981, comes upon me prior to the press ride as I’m waffling between the 501S and its slightly smaller sibling, the FE 350S. He looks me up and down. “You’re a big fella,” he says. “If I were you, I’d go for the 501. Not so revved out on the highway and more low-end power for someone of your, uh, size.”

Husky, unsurprisingly, has followed KTM’s approach to dual sports. Both brands are well known for off-road prowess; instead of dumbing down enduro bikes to make them suitable for street use, they’ve left well enough alone and added the bare minimum to make those bikes street legal (think KTM 500 EXC). That means the FE 501S adds mirrors (or, in this test bike’s case, a single left-hand mirror on a nifty swiveling ball-joint allowing it to be tucked away when not needed), a horn, turn signals, and brake lights to the potent enduro package of the FE 501. And at $11,649, you can be street legal for only $500 more than the sans-S version — a fair price for increased versatility.

I listen to Burleson and swing a leg over the 501S’s rock-hard saddle. A firm seat improves rider manoeuvrability, but this perch is simply sadistic. At 970 mm, it’s also sky-scrapingly tall, though a 32-inch inseam and an exceptionally narrow seat allow me to get the balls of both feet on the ground. (Shorter riders should carefully consider where they stop, lest a flailing foot fail to find purchase.) I turn the key, which is located in front of the fork tube on the right side of the headlight nacelle, and a minimal LCD screen shimmers to life. Supplied info is spartan (speed, time, odo, trip meters), but you should probably keep your eyes on the trail anyway. Controls are as simple as they come and thumbing the electric starter (a kick starter is available as a retro-fit accessory) brings the beast to life.

At its heart is a four-stroke, liquid-cooled, 510 cc, SOHC single sitting in a double-cradle chrome-moly frame. (Coupled with a composite polyamide subframe, the chassis is said to allow “precise” longitudinal flex and provide better feedback.) The same thumper powers the KTM 500 EXC, but does that really matter? You can scoff at shared technology, or you can take heart that it’s a proven mill. It readily accepts being revved out along the hard-packed dirt roads leading to the trailhead, some of the more accomplished off-road riders even surfing the 501S around corners like a flat tracker. A smooth torque curve and precise throttle response provide a sense of complete control. The 501S thrills with a swift surge of sure power, but it never surprises. Clutch pull is light, shifting through the six-speed gearbox precise, and fuelling spot on. This bike can be as wild or tame as your right wrist commands.

When the trail narrows to an undulating single track that looks like a moguls section on steroids, the 501S shines due to the copious low-end torque on tap. I discover just how much is on tap the hard way. In a discipline where momentum is your friend, I make the mistake of pausing to catch my breath at the base of a boulder-strewn hill. After letting out the clutch and settling the throttle, the 501S crawls slowly and surely up the steep incline with a chug, chug, chug — no protestations, just steady progress.

Sure, the FE 501S shares its engine with the 500 EXC — but if you think it’s just a white KTM, you’re mistaken. The biggest difference (besides a subdued colour palette and fun-to-say Swedish brand name) is also arguably the most important when it comes to off-road performance: suspension. The 501S has a linkage-equipped dual compression control shock (the EXC has a link-less system) and closed-cartridge fork (open-cartridge for the EXC). Both are from house brand WP. The shock is fully adjustable and, says Husky, was specifically developed for its enduro lineup for “excellent characteristics in fast and flowing sections, steep downhills, and extremely rocky and bumpy sections.” While I have no complaints after a ride including all of the above, other journalists grouse that the fork is too soft — but fear not; Husky has you covered with tool-less clickers on top of the fork tubes to fine-tune compression and rebound damping.

The roughest terrain on offer, a steep, gnarly, switchback descent, tests but doesn’t tax the 501S (the same can’t be said for its rider). The shock has 330 mm of travel and soaks up even the worst bumps, and the fork (300 mm of travel) keeps the front wheel from deflecting — the bike will go wherever you point it. Its svelte proportions and light weight (claimed 113.5 kg dry) make it extremely maoeuvrable, and good feel from the 220 mm rear brake (a 260 mm disc sits out front) helps me get down the hill without going fanny over fender. An hour and a half on the trails has my legs shaking with fatigue, but the 501S delivers.

Until, of course, I end up in a game of chicken with that Suburban. When I close my eyes to shoot the gap the space shrinks to the width of the handlebar. I feel the right handguard grating across the rock face, and then feel a sharp pain as the cliff forces the brake lever closed on my hand like a nut in a nutcracker, which simultaneously tucks the front and sends me shoulder-first into the rock. Somehow I don’t collide with the SUV. The driver hops out, apologizes, and asks if I’m OK. “I’m fine,” I mutter through gritted teeth as I heave the bike upright. I get the sidestand down and turn, ready to launch into a tirade. But he’s already gone.

Robbed of verbal retribution, I unleash my fury with a proper right-wrist wringing of the 501S when we return to the tarmac. For a dual sport that’s undeniably more off- than on-road, this bike is surprisingly well behaved on pavement. Naturally, those knobbies feel a little vague while cornering, and there’s some vibration through the seat and bar while cruising at 75 mph, but neither is untoward for a hardcore dual sport. Even when it’s revved out to 90 mph the engine isn’t overly stressed, though some headshake encourages more sensible speeds.

Though the Husqvarna logo is often confused with a crown, it’s actually a gun sight, a nod to the company’s gun-making history. With the FE 501S Husky took a proven enduro design and sacrificed nothing to make it street-legal. The result is a truly capable high-capacity dual sport. For serious off-road enthusiasts, that’s right on target.