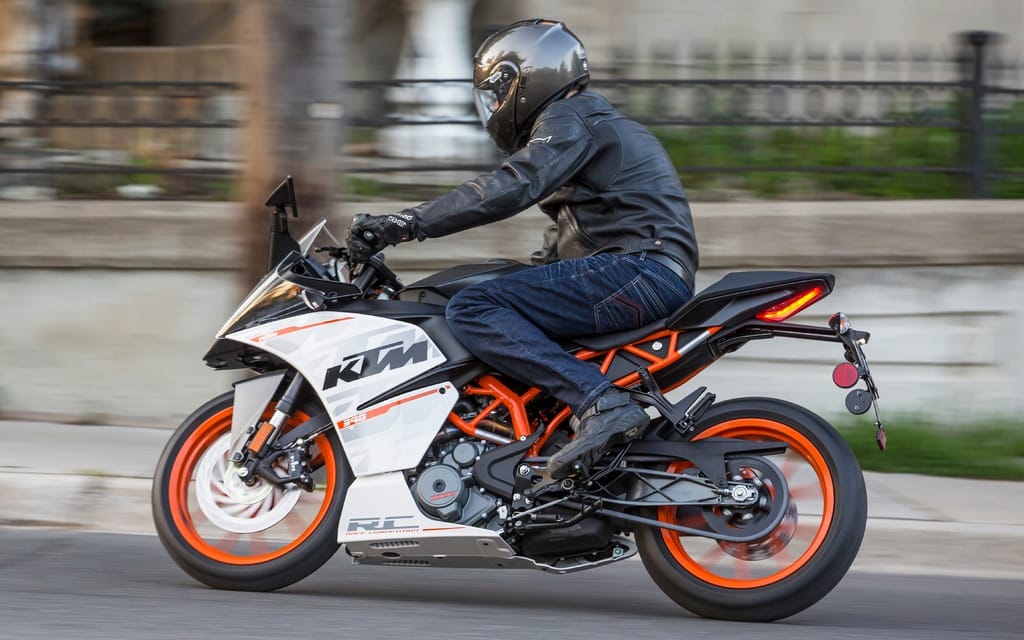 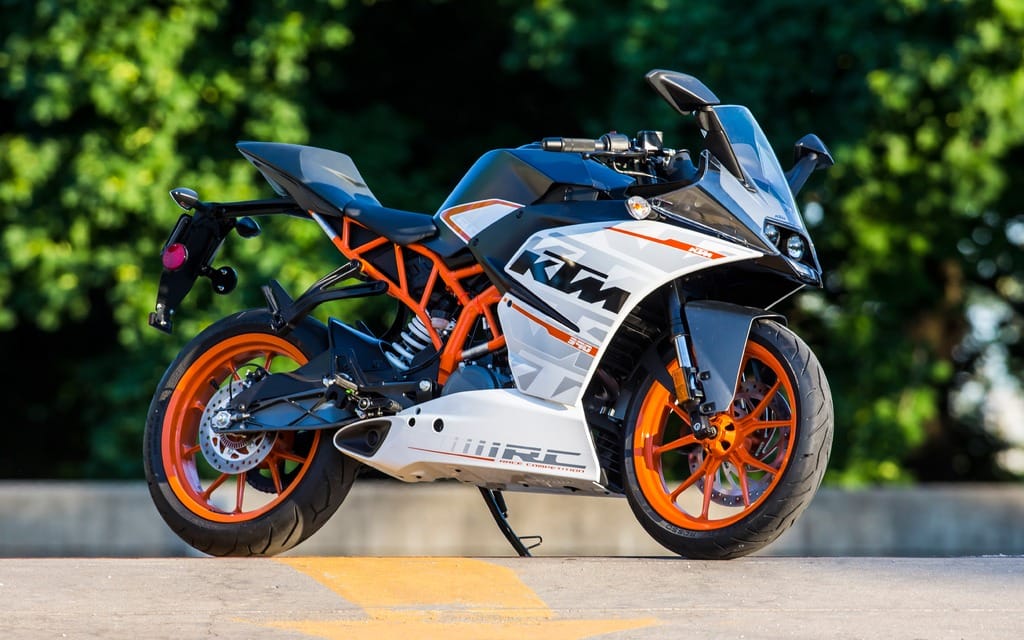 Everyone wants to know. Is it worthy of the hype?

After a four-day weekend of practising and racing on the sinuous (a shop-worn word, but its use is apt) pavement of eastern Ontario’s Calabogie racetrack, hopping off a Ducati 888 superbike and onto a KTM RC 390 for the ride back to Toronto could only be disappointing. After swapping leathers for a textile riding suit, Neil Graham set out just as the temperatures dropped and the rains arrived. He had a long, long night ahead of him.

The wives and girlfriends of motorcycle racers (from pros down to club racers like Graham) give up an immense amount of time to support partners. Weeds grow high in gardens and domestic chores go undone in favour of falling asleep in the paddock of a racetrack to the drone of grinding generators and the midnight howls of a freshly rebuilt engine. Graham knew that the right thing to do was to offer to ride his partner’s new RC 390 back to Toronto so she could ride it on some of the province’s best roads on the way to Calabogie. Except that now it’s raining. And he’s tired from a weekend of racing. Poor lad.

Setting the mechanical bits aside for a moment, it’s fair to say that the RC 390 is the only little bike you’d buy on looks alone. With the orange trellis frame and wheels and its aggressive lines, it looks like a mini Ducati or MV Agusta — Euro light, if you like. Parked in the pits at Calabogie, it gathered at least as much attention as Graham’s old Ducati and even older VW bus. But can the hype around this bike be substantiated?

Graham, as is often the case, became grumpy for no good reason. On the way down to Kingston he appreciated the massive increase in legroom over the miserably uncomfortable Ducati race bike, and the decrease in horsepower from the racebike’s 90-something down to the KTM’s dyno-verified 30-something (we’ve heard numbers as high as 40 horsepower, but better to err on the side of moderation) wasn’t the letdown he expected.

A quick two-three upshift saw the KTM sprint to 80 km/h, and then, with two more gears dispatched, a further jolt to 140 km/h. The RC 390 isn’t just cute, it’s quick. With the roads properly slick, Graham left the bike in sixth gear for Perth Road 10 from Westport down to highway 401, and it maintained a steady 100 km/h up hills without the necessity of downshifting. Were the KTM a big bike, we’d never mention the necessity of downshifting, but motorcycles in this category exist on a fine line: a few horsepower too little and the rider has to wring the neck of the machine to keep up with traffic, which, aside from feeling cruel, can lead to a feeling of vulnerability. With texting SUV drivers drunk on rampant fuel consumption plying the roads, you don’t want to be caught out when they gain on you from the rear.

Here’s the skinny: the KTM RC 390 will cruise with traffic at 130 km/h. And it’ll pass most traffic, too. And, if you like, and if you’re confident in your ability to spot the cops, it’ll maintain 150 km/h for as long as you like. The bugaboo of singles is vibration, but the KTM is smooth, particularly so at 120–130 km/h in sixth gear. Over time vibration can be felt through the handgrips, which can make fingers go slightly numb. It helps to ensure that a light grip is maintained, but part of the problem is the cheapness of the grips themselves, which have the pliability of hard candy. Replacing them with a $20 pair of aftermarket grips would pay instant dividends.

The cheapness of the handgrips reminds you that the RC 390 is a bike that’s built to a price. So, too, the dash reminds you that this isn’t an $18,000 motorcycle — bisecting the dash is an unsightly mould line that splits the top from the bottom; a surprising oversight (and one that’s been retouched out of official factory photographs) for so thoughtfully designed a motorcycle. The digital readout on the dash is usefully designed, and the illumination automatically adjusts for ambient lighting conditions. Speed is prominently displayed, as is a useful gear indicator, and, best of all, a proper fuel gauge. There is also a tachometer that runs across the top of the gauge, but it’s so small that it’s incomprehensible without resorting to a magnifying glass for assistance.

One of the most thoughtful features is the backlit illumination of the switchblocks, as in the style of a car’s dashboard. We put our heads together and even with two candlepower’s worth of intelligence could only think of one other motorcycle – the 2015 Ducati Multistrada – that does this. (Please write if you can think of another.) We could imagine this a boon to the fat of thumb and beginners who habitually stab at the horn instead of the turn signal switch.

The 375 cc twin-cam four-valve single powering the RC 390 is impressive for its power and compactness — the bike is so thin through the midsection that it’s positively anorexic. Less impressive is the engine’s sound, which is reminiscent of what you hear from the basement in spring when the sump pump kicks in. (At the risk of offending the centrestand brigade, how did single-cylinder motorcycles ever gain a fanatical following for their sound? A Manx Norton sounds like a well driller pounding through the sediment.)

Narrow motorcycles like the RC 390 solve certain problems while initiating other problems. As much as a thin midriff aids the feet of the short of inseam to reach the ground (and allows footpegs to be lower to the ground as they’re not as widely splayed) it means that seats are narrower, too. And KTM has not always had a stellar reputation for seats that are kind to the behind. The RC 390’s seat is thin and hard, which would be a far greater problem were the bike’s seating position not so comfortable. Cruiser riders won’t ever believe us, but there is a reason that equestrians eschew highway pegs on their steeds — you really need the feet below the hips to control the beast, be it powered by hay or by gas. And, in a surprise to all, we even did a stint two-up that resulted in a reasonably comfortable journey for all. It’s no touring bike, but the passenger noted that the RC 390 was considerably more comfortable than, for instance, Aprilia’s Tuono.

Aside from the engine’s utilitarian sound, the RC 390 has a surprising degree of mechanical sophistication. The gearshift is light and precise and clutch engagement linear and smooth. As it is with most small bikes, first gear is exceptionally low, which helps beginners get a move on with a minimum of anxiety. The RC 390 is ABS equipped, but attempts to prove its worth in the dry came up short as the single rotor system doesn’t have enough stopping power to lock the front wheel. But in the wet it was a different matter, and a firm squeeze brought the RC 390 to a smooth stop with only minimal pulsing at the lever.

KTM, with the RC 390, has created the season’s most talked-about machine. Even riders who long ago bade small capacity motorcycles farewell see in it something special. But it’s not just the RC 390 that’s noteworthy. It’s the golden age of little motorcycles, a statement we couldn’t have imagined saying just a decade ago.