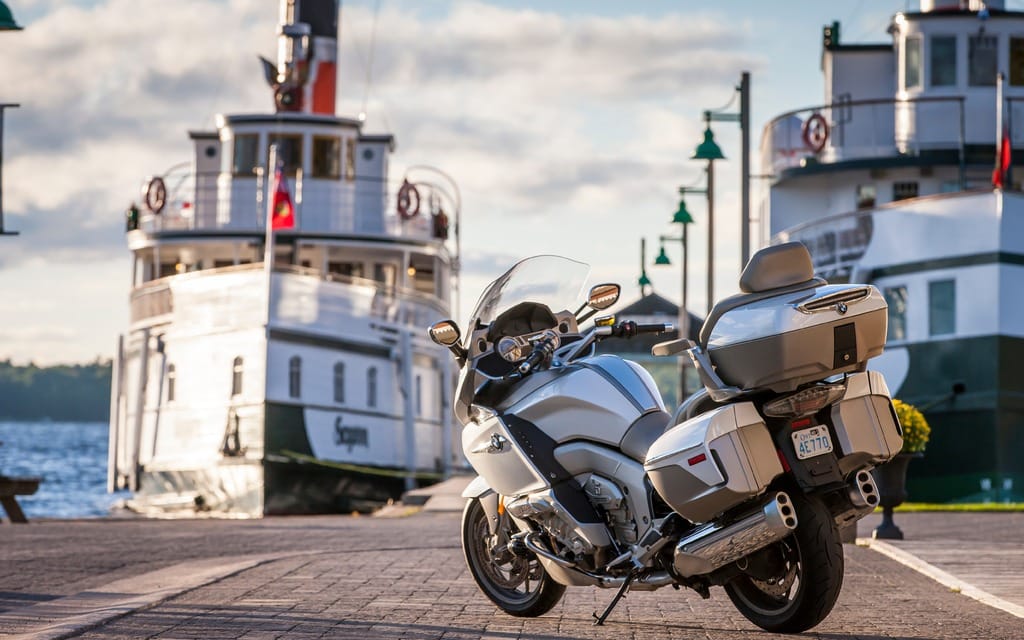 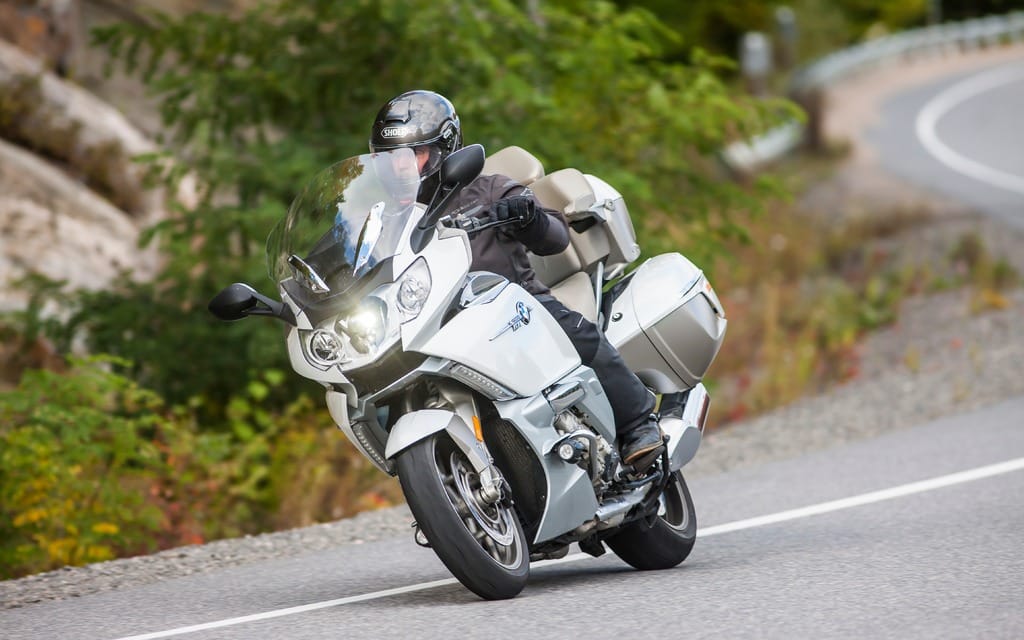 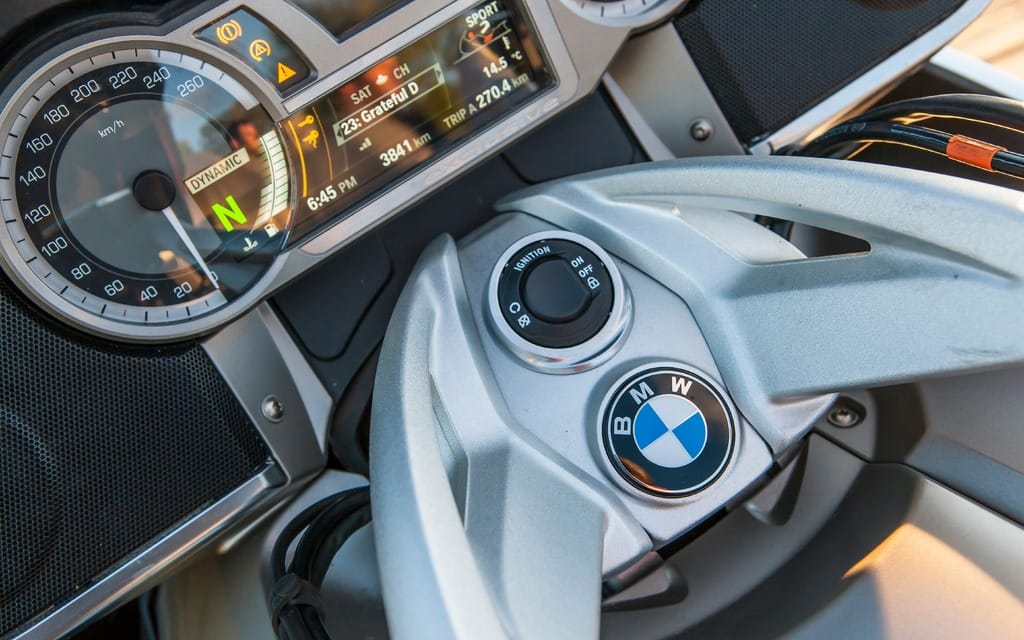 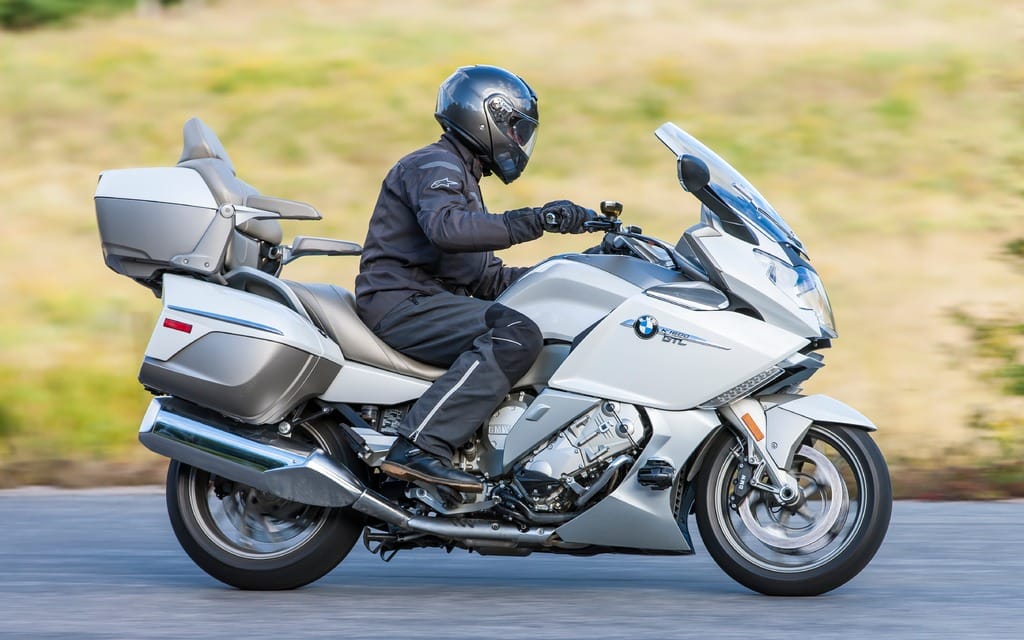 Contributor Paul Bremner compares the BMW K1600GTL to an ACME jet engine of Coyote and Roadrunner cartoon fame, one to which Wile E. affixes a handlebar. “Add heated grips and seat, ABS, remote suspension adjustment, a stereo and a host of other electronic features, and you’ve got the K1600GTL,” Bremner says (January, 2014). He then asks the $30,200 question: Is it worth the cash? “For the right kind of rider in the right income bracket, it’s a slam-dunk. It’s the fastest, best handling, most sophisticated touring bike available. I just wish they’d offer a stripped-down version for half the price.”

Enter the K1600GTL Exclusive, which says nein to Bremner’s notion of a spartan, price-slashed GTL, BMW instead — unbelievably — upping the luxury for the luxury tourer. It also ups the price to $33,400, and in doing so sets a new standard in the Motorrad range.

And that’s a good thing, because, in the words of Neil Graham, a notoriously difficult man to please, “the GTL is a very fine machine.” In our wrap-up of a 2013 long-term test, reviewers (mostly) rave about the GTL, which is essentially unchanged for 2015. “With enough mass to rival an early Honda Civic, the GTL doesn’t look like the kind of bike you’d thrash, but it is. The harder the bike is ridden, the better it responds,” Graham says. Nixon takes it touring along the Niagara escarpment and comments on the flip side of the GTL’s sporting countenance, saying it’s “impressive at a modest pace, holding smooth and predictable lines through slow sweepers. The bike’s sheer comfort lends itself to a leisurely, luxurious jaunt.” Martin Wingate and his wife Joanne state: “A weekend spent on the big BMW left us recharged rather than road-weary.” Paul Bremner takes it south of the border and reports, “Despite weighing as much as a Pennsylvania bull elk, it is a graceful machine with light, precise steering and excellent balance. The brakes are outstanding, ferociously powerful but easy to modulate.” Tim Poupore says, “while it lacks the low-end punch I expected, acceleration is briskly entertaining and the rising crescendo of noise is glorious.” And from the at-times-affable Steve Thornton: “The unholy mass that can cripple you when you’re backing it into your garage conveys a godlike advantage in city traffic; a big, wide motorcycle will certainly get noticed more quickly and frequently than a two-wheeled dart.”

A test stint on the Exclusive reaffirms our affinity for the GTL platform. Acceleration is astonishingly swift, especially in Dynamic riding mode (Road and Rain are also on tap). Fuelling is well sorted, the clutch is firm, and shifting is snappy — though the flywheel still feels too light (a carryover complaint from previous GTL tests). Feathering the clutch and throttle is necessary for consistently stall-free takeoffs. But once you’ve taken off, Bremner’s ACME jet engine analogy still applies.

Braking power is smooth and strong, and the suspension setup easily selectable with the push of a button between firmer and plusher settings. The Exclusive’s Duolever front end provides excellent feel through the tightest twisties Ontario’s cottage country can offer — we’re still amazed by how nimble BMW can make a 360 kg motorcycle feel. But, as you’d wish for in a touring bike, the big-boned Beemer is equally at home while straight-line cruising, its Paralever rear end floating over pavement imperfections. Upon reaching your destination, the majestic Exclusive glides into a parking space with the grace of a cruise ship coming into port.

Considering its luggage capacity, those ports could be a long way off. Saddlebags are plenty big, and the top case is the size of a dorm room cube fridge. (The top case is also where the radio antenna is housed, hidden in the lid.) And because of the passenger seat’s armrests and heated backrest, your companion will travel in La-Z-Boy-like comfort. Likewise, the rider sits in a comfortably upright position, and intuitive controls are within easy reach. With a seat height of 750 mm, the ground isn’t far off either. The seat is squishy, and a mix of analogue and digital instruments are easily decipherable. And when dismounting after sunset have no fear of losing your footing; ground lights emit soft illumination post-shutoff, to the envy of every glow-light equipped Honda Civic Coupe that passes.

There are a few minor flaws: the glare from the handlebar’s chromed reservoir covers is distracting, the distance from seat to pegs is cramped for the long of inseam, and the windshield and fairing fail to protect the rider as well as BMW’s peerless R1200RT. But mostly, the K1600GTL Exclusive delivers as a superb luxury-touring mount.

Still, there’s the lingering $3,200 question: is it worth springing for the Exclusive over the standard GTL? Not in a rational sense, as the added cost doesn’t equate to gains in performance or touring capability, and, as-is, the standard is still a remarkably well-appointed motorcycle. Though if you can afford to splurge on a $30,000 motorcycle, what’s another three grand? One thing’s certain: the top-of-the-line-inclined will be in exclusive company.