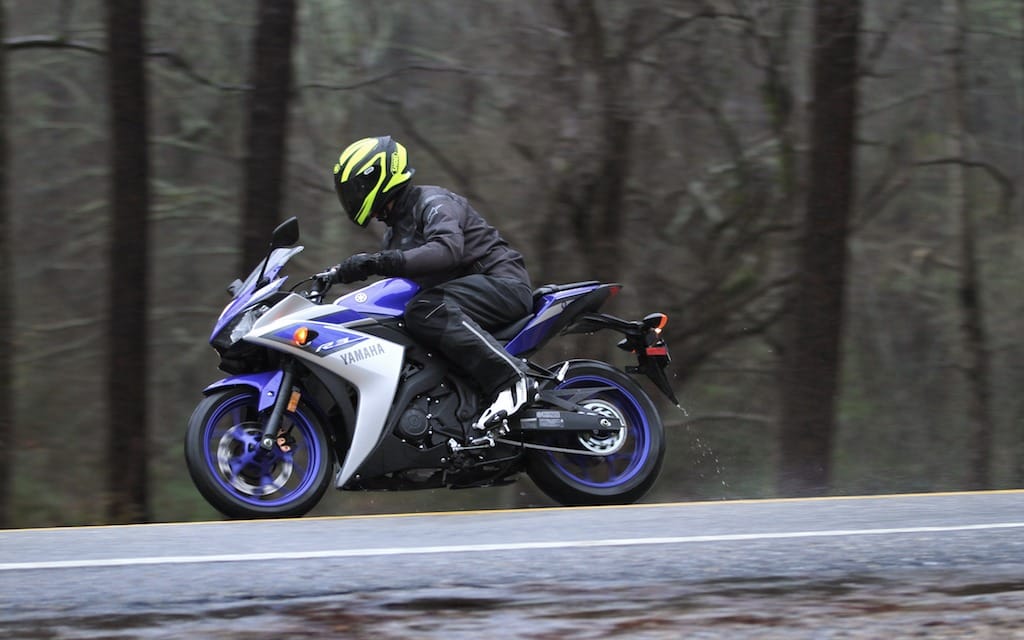 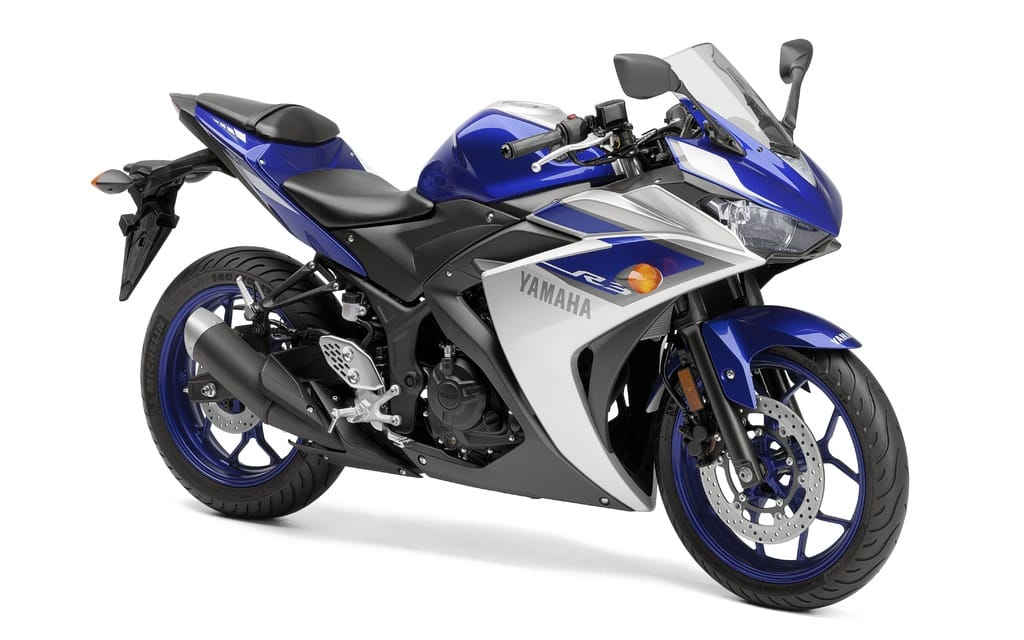 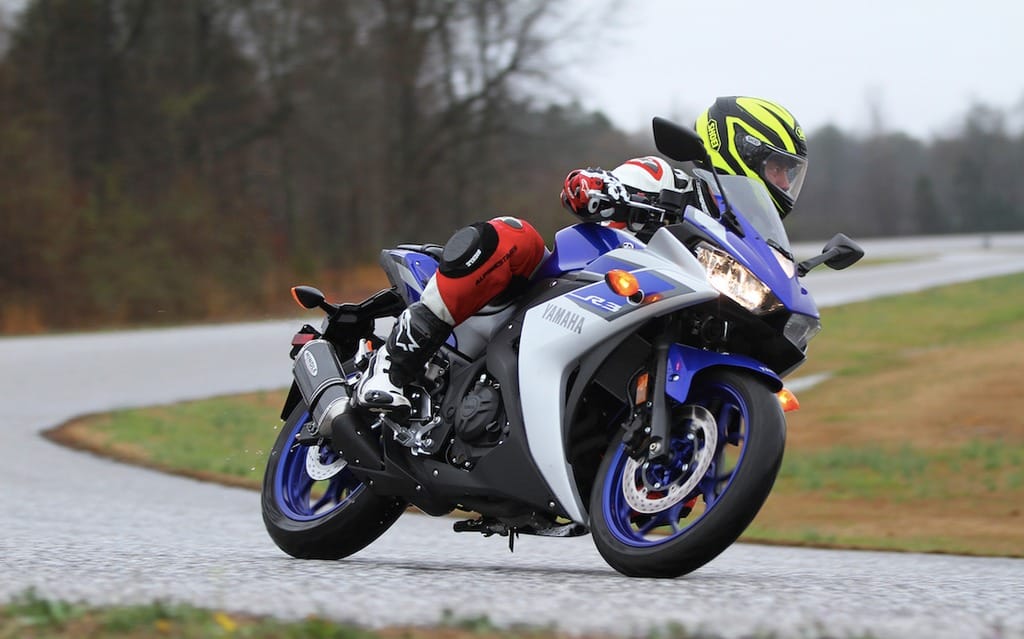 Yamaha joins the budget bike field with the capable R3

The sweet spot. With motorcycles, there is a sweet spot between too big and too small, between too light and too heavy, and between not powerful enough and too powerful. (I don’t really think you can have too much power, but run with me on this.)

Some of us, in our motorcycling lives, have owned, or at least ridden, motorcycles that would qualify as “sweet spot” bikes. But it isn’t an easy cocktail to shake, or else manufacturers would build more motorcycles that qualify. Part of the problem is that the human animal has an inexorable desire to expand — we crave more, we consume more, and any movement toward moderation is seen as failure. The Germans were miffed when they couldn’t hold France. A couple downsizing to a Corolla from a Mercedes-Benz will spot the luxury sedan beside them in traffic and lament what was.

Another problem is that our body size, our flexibility (our inflexibility) our experience (and our inexperience) makes the notion of a sweet spot a malleable goal — the destination isn’t the same for all of us. A pro superbike racer’s 195 horsepower BMW is too much machine for me to capably exploit, and a sky-high adventure bike that allows James Nixon to relax his skyscraper inseam would cause sub six-footers to plunge to the pavement below.

Yamaha, with the R3, has hit the sweet spot, by just about any measure of the yardstick. I’m not the buyer of this bike, nor are many of you, but if any of us had to downsize — once we got over our feelings of inadequacy, like the couple in the Corolla — we could find happiness with this motorcycle.

The rain has not arrived yet, but it will, so I’m suited up in rain gear as we leave the parking lot of a Holiday Inn in Birmingham, Alabama. First impressions are not necessarily the lasting verdict, but immediately the R3 impresses with a smooth engine and a surprising amount of power. The 320 cc, twin-cam, eight-valve parallel twin exhibits a gusty surge of energy and we leave traffic behind and ride into the sodden Alabama hills.

As the miles accumulate, I’m impressed that the Yamaha maintains a countenance of deft manoeuvrability but without the half-a-butt-cheek thinness that small motorcycles sometimes inflict. (Honda’s CBR125R, despite being a wonderfully welcoming machine to all who straddle it, has a seat that becomes more suppository than supportive as the kilometres accumulate.)

At speeds of 120 to 130 km/h, the R3 gives notice that it’s working, but never does it seem to be straining. This is key to the machine’s success. Hammering a small machine beyond its comfort zone can make the rider feel like he’s doing something cruel, like swinging an aggravating neighbour by his tail.

Just as my tolerance for the Interstate begins to wane, we exit and climb into the mountains. Intermittent rain is joined, at higher elevations, by thick fog, and the road surface is bumpy and coated with mud from 4x4s insensitive to the traction requirements of motorcyclists. Still, the R3 is never beyond its comfort zone. The seat is broad (for the small bike class, at least) and the riding position is upright and rational. A genuine surprise is the engine’s willingness to be lugged. For most of our meandering ride over hill and holler, I left the transmission in sixth gear, and the engine — uncomplainingly — did all the work.

After a passable burrito in a Mexican restaurant in the stock-car mecca of Talladega, the rains drifted east to Georgia and the pace quickened. Roads, however, were still damp, and it’s here I wished for antilock brakes, which are, bafflingly, not even available as an option. Small motorcycles are exceedingly sensitive to price, but at $4,999 the R3 is inexpensive enough that even as an option the additional cost of ABS would not feel exorbitant. Honda’s CBR300R is $5,199 with ABS, but, while a very good machine, its horsepower is in the mid-20s, while the R3, along with the $5,799 Kawasaki Ninja 300 ABS, boasts numbers in the mid-30s. (The non-ABS Ninja is $5,399.) The R3’s natural competitor in the marketplace is the Ninja, and I suspect ABS could have been added and the price could still undercut the ABS-equipped Ninja.

The next day the rains returned, which was doubly disappointing as we were off to Talladega Grand Prix raceway to ride the R3 (and the R1, too). And it was my birthday. Cowardly journalists such as Colin Fraser stayed under cover, but not wanting to let a downpour dampen my day, I suited up and hit the track. And what an odd track it was, with virtually no run-off in some corners and with pylons scattered along the edge of the track at random. At the end of my first lap a man standing in the middle of the track was frantically waving his hands at me. I’m going the wrong way? Ah, now it makes sense.

Righted from my wrong, I discover that the track is a gem, with unbelievably grippy pavement, even in the wet. The track is not, however, very long, and on its modest back straightaway I was surprised to see 152 km/h in fourth gear. I have a pet theory that you can tell the inherent rightness of a motorcycle by how much confidence it gives you in the damp. (I posed my query to an engineer at a press event once and he grabbed a drink from a passing tray and fled.) After two days of riding the R3 in the rain, I can confirm that my theory holds water — the bike is absolutely as stable as it is nimble.

A telling moment about the merit of the R3 happened late on the day of our road ride. I was offered an FJ-09 but declined. I wasn’t yet finished with the R3. Sweet spot? Indeed.